For week 11, I decided to follow up on my previous work on the scissor throw at the head level, and try a fancier version with a spin. This one really is purely for aesthetics, but is a beautiful looking takedown for film work. The initial set-up is pretty much the same, but once in position, I relax my legs as my partner removes his arms allowing me to drop. I don’t fully open up my legs though. I need to keep a bit of squeeze to allow the momentum to swing me back up a bit so that I can land on my feet as my partner throws himself down to make it look like I’m initiating the throw. The end result is pretty cool looking, as you’ll see below. END_OF_DOCUMENT_TOKEN_TO_BE_REPLACED

In early February, I went away to Toronto to teach a seminar for a local Jiu-jitsu organization. While I was there, I also met with a number of Toronto stunt coordinators, hoping it might lead to future opportunities. Happily, the first one I met with hired me to work on a show while I was there. He also hired me to put on a seminar for some of the female stunt doubles who work on his show, requesting that I teach them some fancy throws and flying techniques that would look good on film.

I had a number of techniques in mind, but wanted to work on them in a context that was better suited for camera. I also had to train up a training partner who was local to Toronto so I had someone to demonstrate techniques on for the seminar, so I used our training time to pick a few moves that I wanted to tweak for film and dial in for the seminar. These include kani basami (using the head), flying omoplata with gun disarm, back flip into arm break, and back flip to counter ushiro guruma into ura nage. I’ve put them all together in the video below. END_OF_DOCUMENT_TOKEN_TO_BE_REPLACED 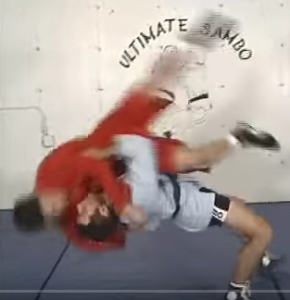 I found 3 different Sambo throws that caught my eye and decided to learn them by teaching them to my students on an alternative curriculum day, which happen to coincide with the 10-year anniversary celebration for my dojo. Here is the video of me doing the 3 different throws: END_OF_DOCUMENT_TOKEN_TO_BE_REPLACED

This week’s technique was an easier one for me, while being a little more challenging for my uke. In this technique, I kick my leg over the handshake while grabbing the back of the neck, then drop to the ground. My leg and hand serve as an anchor so all I need to do is drop down on an angle so my partner has no choice but to go down, as you can see in the video below. END_OF_DOCUMENT_TOKEN_TO_BE_REPLACED

For my second week of my 52-week challenge, I decided to try something challenging that I’ve been interested in trying for a while; using a round-off/cartwheel as a way of countering a throw. I’ve seen this done most commonly against a shoulder throw, but it can be done against different types of throws. Here’s a video I used for inspiration: END_OF_DOCUMENT_TOKEN_TO_BE_REPLACED 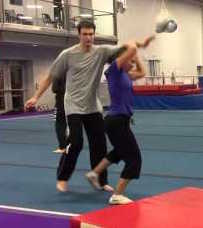 Happy New Year, everyone! I’ve decided that this year I’m going to try to bring a bit more fun and whimsy into my life. It feels like I’ve gotten a bit too end-goal oriented that I’ve lost a bit of my sense of playfulness, particularly in my training in the martial arts and for my career as a stunt performer. So rather than just focus on the things I want to accomplish, I’m going to take more time to remember why I got into my training in the first place, to relax and have more fun on the journey. As a part of this, I’ve decided that I’m going to learn one new technique related to Jiu-jitsu each week this year. My choices will be more focused around learning something that looks fun to learn and do rather than for pure practicality. END_OF_DOCUMENT_TOKEN_TO_BE_REPLACED