4 Self-Defense Training Habits that Can Have Dangerous Consequences

In order to maintain a safe training environment, practicing self-defense techniques involves a type of role-playing in which one person plays the role of the defender and one or more people play attackers. We play out the scene physically so that we can practice reacting with techniques that would theoretically be effective in a real situation. But if role-playing is the main emphasis of your training, you have to be aware of certain practices that can train bad habits that can have dangerous consequences in a real attack. 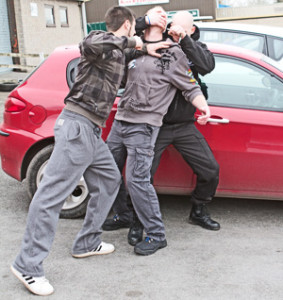 Habit #1: Focusing entirely on one attacker.

In most self-defense classes, techniques are presented and practiced assuming a 2-person scenario, one defender and one attacker. From a practical standpoint, it’s easier to learn techniques and manage a class using this general dynamic. The problem is that not all scenarios fit this dynamic. You could start with one attacker only to have their friends jump in to help. Or it could be a group attack right from the start, swarming a single person. Or you might not be alone. You could have a friend helping you out, or you could be minding a child that needs your protection. So if you only train to mentally and physically to deal with a one-on-one scenario, you might find yourself struggling when the situation is different.

Solution: There are a few ways you can address the problems that come with this habit. You can work on awareness as part of your one-one-one training by keeping aware of your surroundings as you train. Look around you as you back away from the first attacker. Also, focus on keeping your head up as you do throws or takedowns or when applying after-throw controlling techniques. Instructors can encourage this by attacking students from behind with a foam blocker or training pad as they finish their techniques, or even mid-technique. As you gain more experience, you can also try specifically working on multiple attacker and/or multiple defender situations as part of your training regimen.

Generally speaking, people avoid making potentially violent contact. When not used to it, it makes people uncomfortable. Understandably, people training in self-defense, when starting out, often shy away from making contact or having contact made on their bodies, even if it doesn’t really hurt. But contact is a necessary part of learning. Without it, you might not know if you’re on the right spot with certain types of targets (nerve motor and pressure points are a good example). Without contact, you don’t learn what it feels like to be hit on any level, which could lead to a bigger psychological reaction to it in a real attack, simply because you have no experience with it.

Solution: Introduce contact into general training where it make sense. Some targets can be practiced with light contact safely, allowing students to communicate about the accuracy of placement. For targets that aren’t safe to make contact, like when practicing a strike to the nose, just make sure you don’t practice your strikes at full extension. This essentially trains your muscle memory to fall short of your targets when striking. It is far better to train so that you would make contact were you to fully extend your strike, but pull it, stopping it short at your target. Read more details in my blog post The Importance of Contact for Developing Strike Targeting. Contact sparring is another good way to introduce contact, but in the interests of safety and long-term training, there has to be some control, not just all out contact, particularly when including the head as a target (which we do). It’s really useful to learn how to pull a punch when your partner mistakenly moves into a punch.

In many self-defense programs, instructors focus more on responses to the the most aggressive, most dangerous types of attacks. As such, the responses often use high levels of force, such as strikes to the throat, temples, etc. Sometimes instructors also teach brutal finishing blows after you’ve thrown someone to the ground such as a kick to the head or spine. In reality, you can’t always justify using deadly force in self-defense, so if you only learn the most brutal types of responses, you could find yourself having to explain yourself in court.

Solution: Instructors should teach self-defense that is in line with the self-defense laws to which you are subject in your area. In Canada, this is section 34 of the Canadian Criminal Code (which I described in this article). The general rule, as it is in many regions in developed countries, is that you can use as much force as necessary to nullify the situation and get away safely. After-throw techniques should be taught with caution, especially ones involving strikes to dangerous areas. If the attacker is no longer a threat after taking them down, you probably shouldn’t be kicking a person in the head; you should probably be escaping. Personally, I prefer to teach strikes for which the level of force can be modified for different contexts for after throw techniques. One I commonly teach is a knee to the ribs, which can be done with more power if more brutality is required, or just a quick pressure drop to compress the floating ribs to affect the solar plexus to set up some sort of lock.

Teaching a prescribed response to a specific attack is a good place to start for people who are new to self-defense. Students first need to learn what types of tactics are important in specific contexts, as well as what types of strikes, takedowns, etc, can be used. The problem is that it trains people to believe that self-defense is only a matter of matching the right key to the right hole. In reality, it’s not that simple. Attackers may react defensively to your own defensive response, by blocking/dodging a blow, stepping out of a takedown, etc. Or they may change their attack entirely in response to your defense.

Solution: Train to adapt to the changing circumstances of an attack. There are a variety of ways you can train adaptiveness in your self-defense, once you have achieved a base level of understanding of the techniques of your style. I wrote a few blog posts going into detail on this topic, so check out Principles vs. Prescriptive: An Adaptive Approach to Self-Defense, How to Add More Realism to Self-Defense Training – Resistive Attackers, and How to Add Realism to Self-Defense Training – Adaptive Attackers for more info.

Are there any other self-defense training habits you’ve seen that can have serious consequences in a real attack? If so, how would you compensate for them? Please share your thoughts in the comments.