5 Advantages of Training with a Female Martial Arts Instructor 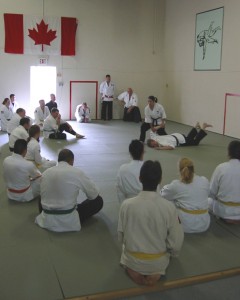 For some reason, a lot of people think that because I am a female martial arts instructor that my students would probably be mostly women. This is far from the truth. The reality is that my division of men to women is pretty much the same as it is in most martial arts schools, with more men than women training. People train for all sorts of reasons, but many of my students, both men and women, look at training under a female instructor as beneficial to their learning. Here are some of the reasons why:

1. Less Macho Training Environment. One of the reasons many people are hesitant to take up martial arts training is because they are worried that there will be too many people who train with a macho attitude using the dojo as their own personal proving ground. They worry that this kind of environment would make the social element unappealing, and the training environment potentially dangerous as people take out their personal baggage on unsuspecting partners. With a female instructor running the show, a class is less likely to attract people with macho attitudes because they’re usually men and those types of men don’t usually have any interest training with a woman making assumptions that they wouldn’t get what they want out of it learning from a woman.

2. Greater Opportunities for Technical Development. Usually women are smaller than the people they train with in the martial arts, being a male dominant environment. As a result, they often have to learn to be that much more technical, in order to be faster, more agile, more accurate, more efficient to be able to apply techniques on bigger, stronger partners. If the woman has stuck out their training over the long term, they’ll often have developed greater technique out of necessity, and they pass on this knowledge to their students.

3. More Creative Self-defense Tactics. We all know that people are more likely to face an attacker that is bigger/stronger than us when it comes to “the street.” Aggressors usually target people they think they can take, usually pitting their size against that of their victim’s. Because women are usually much smaller than the majority of their training partners in the martial arts, they are more likely to come up with lots of little “tricks” that help them make their self-defense tactics more effective. Women who stick with their training often learn to utilize a “whatever it takes” mentality, helping them to see and seize more opportunities when they practise self-defense applications. This is especially notable when you see them do higher stress activities like self-defense circles. Anyone who watches someone who is good at this can easily take something away from it and learn from their example.

4. More Communicative Environment. Many people find that it’s easier to communicate with female instructors than with male ones, often finding them more approachable, more encouraging, and easier to learn from. There is scientific research supporting this line of thought. A recent communication study conducted by Manchester University gave findings that indicated that women have better command of  language, using less words to communicate the same points effectively. It also found that they are far more likely to make more genuine-sounding compliments.

5. Better Leadership. In a recent Zenger Folman study, the results of which were featured on Forbes.com, women outscored men in all but one of the 16 leadership competences studied. Though there were more men in the study, the women were seen as better leaders at every level. According to the study, women build better teams, are more liked and respected as leaders, tend to be able to combine intuitive and logical thinking more seamlessly, are more aware of the implications of the their own and others’ actions, and think more accurately about the resources needed to accomplish a given outcome.

Of course, just because an instructor is a man does not mean that they cannot have all these benefits too. This article is just trying to point out some of the unique ways that women develop as martial artists and how these can benefit their students. Each instructor should be evaluated for their own unique talents and abilities.

Have you ever trained under a female instructor? If so, what advantages did you see from a student’s perspective?