A brief preface: When I was asked to review this book, I was offered the chance to interview the author about guns for self-defense. I think the idea was that it would make it slightly more relevant for this martial arts blog, with our focus on self-defense. I declined the offer because of my view that in Canada, guns are not, for civilians, truly self-defense tools. Our culture and our laws make the use of guns, handguns especially, difficult to use for self-defense. In Canada, guns are in a lot of ways viewed more as tools; for farmers, hunters, law enforcement, and the military. However, for understanding the differences in our views on self-defense with our brothers to the south, I thought that this would be an interesting book to review, so I give you:

American Shooter: A Personal History of Gun Culture in the United Sates by Gerry Souter 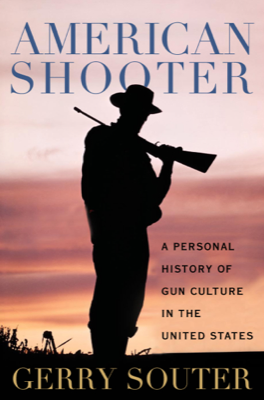 American Shooter can be summed up one of two ways:

An illuminating and fascinating look into the historical development of gun culture & technology and the shift of the National Rifle Association from the guardians of marksmanship to the staunch 2nd amendment defenders of today.

The painfully meandering history of guns in America, the evolution of the culture, technology and the National Rifle Association, mixed with the delightful experiences of the author as a recreational shooter.

I both thoroughly enjoyed this book, and found it very difficult to finish. The content within the book is good, but the delivery is a little weak. It reads like desktop-drawer memoir, a term I picked up during my time at Carleton University studying journalism. One of my professors said every journalist has an unfinished book he’s been working on for 15-years in his desk that he slowly pecks away at.

This book reads like it’s a sum of notes, thoughts and insights tossed together haphazardly over the years. Souter jumps around the timeline with reckless abandon that would make Marty McFly dizzy, and more than once I wondered how I went from dot-com to civil war era in a paragraph.

In an interesting irony, the book’s author concludes that the NRA, which has moved away from pushing shooting as a sport, should be using it’s resources to help make shooting more mainstream, a respected sport, and to broaden its appeal less to educated gun enthusiasts and more to the mainstream public. I wish the author, after penning those words had gone back and taken a look at parts of his book. He gets very in-depth into calibre differences of bullets and the nitty-gritty of gun technology, differences that only enthusiasts would truly enjoy.

So that’s why I found the book difficult to get through. Having said all that, I still enjoyed the book. Getting past the technical small stuff, I truly enjoyed learning about overall advancements in both gun technology and the development of gun culture. The author also intersperses his own stories about his development and relationship with shooting that really captures the feeling of recreational shooting, and makes a strong argument for the sport of shooting. And while he defends the American right to bare arms, he believes that the desire or the need to strap on a piece when you walk out the door for self-defense is a failure of American society with no easy fix.

This book has me quite torn, which is why my review is all over the place. If you’re interested in the history of gun culture in the US, and want an insight into the NRA, and have never really understood sport shooting culture, this is a good book. Just don’t expect to sit down and read it in one afternoon, as the pacing is difficult, and the jumping around the timeline means you need to really be paying attention.

This book truly is an insightful, at times painfully meandering, yet delightful romp through gun culture, personal experience, and polarization of the gun debate in the United States. If you want a rational look at a very unique part of the American psyche, check it out.