A couple of years ago, I did some cross-training with Chris at a Filipino martial arts school in my area. We enjoyed it for a while, but our interest waned. This school’s teachings were largely based around practicing very set sinawali (patterns), which were fun at first, but we eventually felt that it wasn’t taking us any place new, that there was a flatness to the general approach to training.

Last month, I was given the opportunity to meet up and train with Filipino martial arts instructor Guro Mark Mikita. This man is no weekend warrior. He is a consummate martial artist who has dedicated his entire life to his training, having trained over 46 years, nearly every day, and for long bouts, he was putting as many hours into his training as most people do into their full time jobs. And it shows in the way he moves and teaches. Here is a photo of him (can you believe he is in his 50s?!?!) 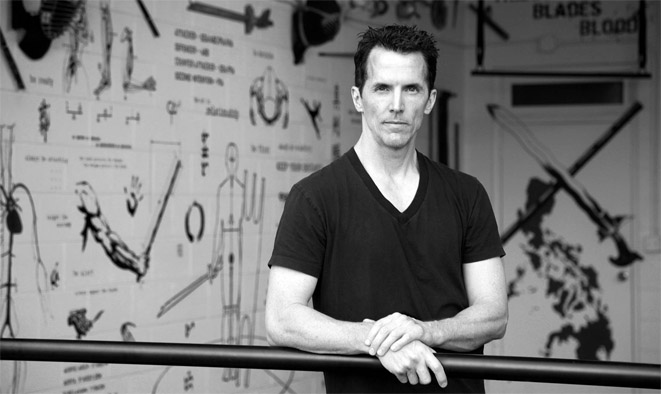 During one training session, I was feeling very much ill at ease performing a relatively complex sequence of movements involving a stick in one hand and a knife in the other. This was particular hard for me because I haven’t done much in the way of weapons in any of my previous training, let alone a different weapon in each hand. And the sequence itself was quite complex. Guro Mark then explained that this was a “machine-gun” approach to teaching and learning. You make the movements so complex and hard to keep up with that you have no choice but to just absorb the over-arching principles behind the techniques rather than rote memorization. My brain did indeed feel quite broken initially. But as the training went on, l got little flashes of understanding about the kinaesthetics behind the techniques, which are vastly more important that the techniques themselves. You can get a sense of this watching this video of him below.

Guro Mark also showed us a number of times how the same movements that are done with the weapons can also be done with no weapons at all. The commonality of technique from the weapon work transfers over into the empty hand work. We didn’t focus on this, but later on, after I had done a lot more practice of a particular weapon technique, I tried the movements without the weapons and it was very easy for me to make the transition despite the fact we hadn’t been training it. It is true that I have more training in empty-handed combat methods, so it makes sense I would find it easier not having those pesky weapons cluttering up my hands, but the flow of movement is still quite different. I had learned that flow from the weapon work itself.

I can see now that the flow of movement that is characteristic in the Filipino martial arts has a lot of development potential for me as a Jiu-jitsu practitioner. But it’s not just that which has piqued my enthusiasm. It’s also Guro Mark’s way of imparting the knowledge, guiding students to learn the underlying principles by allowing them to develop their own personal experiences with them. I am feeling truly inspired by it all and am looking forward to spending more time exploring it further. If you’re ever in LA, be sure to look him up at the Mikita School of Martial Art.

Some people say there is no point in cross-training in other martial arts styles, that focusing all your training in a single style will go further towards becoming a master. I don’t really buy that. There is a classic Japanese saying, “There are many paths to the top of Mt. Fuji.” One path might take you so far, but you might encounter a blockage that leads you to explore another path, or several other paths. And those paths might be easier for you, while simultaneously being harder for others. We all have different physical attributes, learning styles, and personal inclinations. By trying different styles of training under different types of instructors, you can get flashes of insights you might not get exposed to in your usual circles. This doesn’t mean you have to give up your former style. You can learn from multiple styles and instructors to improve your overall perspective of martial arts and self-defense as a whole. That being said, I wouldn’t advise a beginner martial artist to over-diversify. It can be confusing to someone who hasn’t already developed a base and an understanding of how to compartmentalize one’s learning.

Have you ever cross-trained in other martial arts styles? If so, what kinds of benefits did you experience from it? Please share your thoughts in the comments. 🙂