An Introduction to Nagasu Ryu Jujitsu 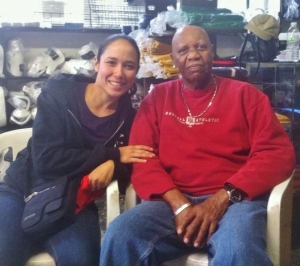 This past weekend I travelled to New Jersey to visit Sensei Damien Wright’s dojo, Wright Fight Concepts, to teach a seminar. While I was there, I had the opportunity to train in one of his classes in which he gave me an introduction to the fundamentals of Nagasu Ryu Jujitsu. I also had the opportunity to meet and have a long chat with the founder of the style, Shihan Wayne Ford, who goes by his nick name, “Papasan” (seen in the photo with me on the right). Between my time with both Sensei Damien and Papasan, I learned that our styles are quite similar in principal, but with interesting stylistic differences that are easy to incorporate as a Can-ryu Jiu-jitsu student. I’ve divided up this article into a few of the many Papasan quotes that characterize his teachings.

This is a guiding principal in all Nagasu Ryu techniques (or at least as far as I can tell. In the class I took, part of the warm-up consisted of standing in place with your knees slight bent then dropping your weight then catching it with your feet. We did this for about 5 minutes, but Sensei Damien said that in some of his training with Papasan he had done the exercise as long as 15 minutes. “Down!” is about rooting into the ground in stances, like is practiced in many martial arts including Can-ryu, but also using that root to structurally transmit outward expressions of energy through techniques downward. As you can imagine, this leads to the attacker ending up on the ground a lot.

“Nagasu” means “flow” in Japanese. During our chat at The Striking Fist, a martial arts shop in the heart of Woodbridge, New Jersey, Papasan told me why he chose this as the name for their style. He explained that you can’t just try to use this technique or that technique. As he put it:

You have to know what circumstances a technique would work in as well as when it would be useless, and be able to flow from one technique to another as circumstances necessitate. It was interesting to hear Papasan talk about this as this was directly related to the topic for the seminar I taught, “Making It Real: Training Strategies for Dealing with Adaptive Attackers.” Below is a video of Papasan talking more in detail about Nagasu Ryu, covering principles including simplicity, flow, theoretical vs tried application, and more.

This line of thinking also applies to the physical and mental characteristics that are unique to you. As such, Papasan says the following:

“You can’t learn to defend yourself if you don’t know the ‘you’ you’re defending.”

Papasan sees self-exploration as a necessary part of martial arts training for self-defense. Each person has their own strengths and liabilities in relation to the techniques they seek to apply in self-defense. Moreover, each person has mental/emotional predispositions that can affect the way they might react in a fight. The better one knows all one’s strengths and liabilities, the more competently they’ll approach a self-protection situation.

“Violence will tolerate no lies, especially the ones we tell ourselves.”

We all seemed to agree that our two styles are complementary, sister styles if you will, after having conversations with Papasan, Damien Wright Renshi (5th Dan), as well as Michael Burrowes Shihan, 6th Dan and heir apparent to Nagasu Ryu, who came to watch my seminar. This is part of the reason why Sensei Damien finds it beneficial for him to have me teach seminars at his dojo. This is also why I intend to bring him out to Vancouver in the new year so I can introduce him and Nagasu Ryu to my own Jiu-jitsu community. It really is nice to know that there are other styles out there that have come to similar conclusions about what is effective for self-defense, and have similar approaches that allow us to learn from each other. It helps reaffirm what we’re doing, while adding to our knowledge base. Here is a video of Papasan doing some simple straight punch defenses (Sensei Damien said to expect a few more drills and defenses that are specific to Nagasu Ryu Jujitsu in the upcoming weeks on Wright Fight Concepts’ YouTube channel too.)

Now over to you. Does your dojo interact with any “sister styles”? If so, how have you found the relationship beneficial to your training. Please share your thoughts in the comments.