Black Belt Is When the Real Learning Begins: Putting the Saying into Practice 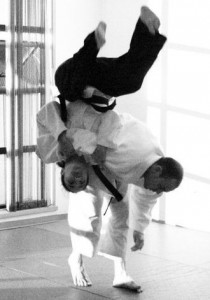 So many students of the martial arts make earning their black belt a goal only to be told that black belt should not be an end goal because that’s when the real learning begins. Some people think that this is just the sort of thing instructors say to keep students after they reach this milestone. Others think it is a statement to keep students humble. While this reasoning may be true in some cases, the statement is still true in its most literal sense if the student is open to it.

Making a Spectacle of One’s Self

Recently, an old friend, colleague, instructor and room mate of mine, Jonathan Jamnik, came to Vancouver for a visit and trained in our stunt throwing class. Jon, with over 12 years experience, holding a 2nd Degree black belt in Shorinji Kan Jiu jitsu, has a well-deserved reputation for having awesome breakfalls, being able to fall out of pretty much anything without hurting himself, even on hard surfaces. During my time training with him over a couple of years while he lived in the area, I made noticeable improvements in my breakfalls through the various challenges he tossed my way. But it was Jon’s highly developed breakfalling ability that made it hard for him to fall in a way that looked messy, for the purposes of movie stunts. His first few attempts were spectacularly bad in the sense that they were perfectly clean breakfalls, the opposite effect we were going for. But that was only the beginning.

When an experienced, open-minded martial artist fails spectacularly, it gets the whole learning process in motion. Many black belts fail to take even this step, avoiding trying new things that take them out of their comfort zone for fear of exposing a lack of the knowledge they think they’re supposed to have. But like a beginner, you have to be willing to let yourself look foolish. The problem is that many black belts worry that it will compromise their authority. And the more they hold onto this line of thinking, the less they grow as martial artists.

The Magic of Pendulum Learning

Spectacular failure, like in Jon’s case, gave the momentum he needed to swing the pendulum of learning equally in the opposite direction. After the first few failed attempts, his “failures” were of a different nature. He tried “not” to breakfall, which resulted in a somewhat painful-looking fall lacking its usual protective form. Then the pendulum swung back the other way (but not all the way the way back to his original form) and he would hit the ground with clean form, only to remember halfway through to let it get “messy.” By the end of the class, it was starting to take shape in the form of what we were attempting to do.

The difference between an open-minded black belt with years of experience and a lower ranking student who’s only been training for a few months is that the pendulum swings much more quickly, with less need for correction. People like Jon are often more intimately aware of their shortcomings when they fail to do something, which makes it easier to recognize what actions must be taken to fix them. As a result, a competent instructor need only make minor corrections to gain big improvements from the open-minded black belt. Jon made massive progress within the 1.5 hour class, an amount of progress that could take a much less experienced student months to learn both safely and competently.

This brings us full circle, back to the quote from the start that “Black belt is when the learning begins.” When you earn your black belt, you’ve establish a solid foundation in your style of martial art. Essentially, you’ve learned how to learn, and that’s why this is when the real learning begins. IF a black belt holder sticks with their training, IF they keep a humble spirit, they are more likely to tap into the wisdom of this statement. They’ll be more likely to let themselves “fail” in order to get the benefits of the more rapid pendulum learning that their experience can afford them. I try to keep this in mind in my own training as I still have decades of learning left in my martial arts career.

Do you have any thoughts on pendulum learning or about the learning curve as a more experienced martial artist? Please feel free to share your thoughts in the comments. 🙂

2 thoughts on “Black Belt Is When the Real Learning Begins: Putting the Saying into Practice”