Every so often a prospective student emails me and asks me if it’s realistic for an older person to take up Jiu-jitsu. Most of the time the people asking are in the 40s and overweight or out of shape. I’ve always said that it’s possible for anyone of pretty much any age and physical condition (provided doctor’s approval) to start training, but it was only after Rick Karnowski started training with us, that I had the perfect person to point toward as proof.

Rick started training with us in May 2010 at the age of 63. He was overweight, out of shape and had no real martial arts experience (only 6 months of Aikido training that he took over a decade ago). I always try to maintain an optimistic attitude toward all my students and their capabilities, but I found myself wondering how long he would last, never having had anyone of his demographic and situation sign up at my dojo. Well, I’m happy to say that over a year and a half later, he’s still with us and has become the perfect example of what people can accomplish if they are inspired and persistent.

When he first started, Rick weighed in at a hefty 220 lbs for his height of 5’8″. He started slow with his training going at his own pace during classes, but always attended 2x a week and every other Sunday for 2 hours of open training. In addition to his training, he lowered his carb intake and started eating less. With only these 2 lifestyle changes, Rick lost 65 lbs, shattering the idea that it’s really tough to lose weight in your 60s. After he lost the weight, he also added swimming to his weekly exercises. After gaining a little muscle mass, Rick, now 65, weighs a healthy 160lbs and is even a little cut now. Check out the before and after pics below. (I wouldn’t blame you if you accused me of using pics of two different people, but these are actually pictures of the same person!) 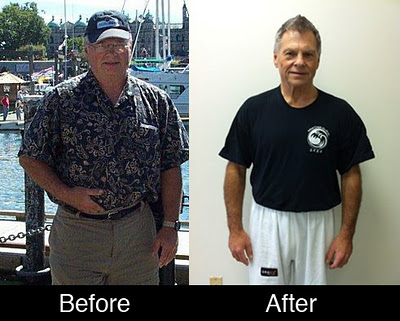 “Training in Jiu-jitsu is great for getting in shape. It re-sets the body to what it should be,” explains Rick on his success with his physical development. “I honestly didn’t know what I was getting into when I first started, but once I make a decision, I just do it. You’ve got to make a commitment to get the most out of it.” And commit, he did. This past September, we added two Self-Defense Fitness classes to our weekly schedule. Rick now attends those, in addition to his two Jiu-jitsu classes each week. He holds the rank of orange belt (5th kyu) and we’re getting him ready to grade for green soon. He was also a co-winner of our dojo’s “Hard Core” award for this year, as voted by our students. Rick is also a dauntless force to be reckoned with, who rarely flinches when sparring. Hard to imagine for someone who carries a senior citizen card, but true. This partly comes from the mental benefits he has also received from his training.

Throughout his life, Rick had confidence issues. “If someone got tough with me, I used to get tough back. I was reactive and would let my emotions get away from me,” Rick recalls. “Martial arts helps you be mentally focused and relaxed, and it also gives you opportunities to deal with fear factors and learn to overcome them. Then it becomes easier to be assertive in your life so you can choose your responses rather than resorting to knee-jerk reactions. Now I just stay relaxed and calmly diffuse aggressive situations.”

Rick, like everyone, still has challenges he faces. He has a fear of falling, which sometimes affects him when he does breakfalls and when he’s thrown. He is also trying to improve his flexibility in his back and shoulders to help him with his speed and mobility. That being said, Rick makes a conscious effort to work on those things. He has already improved his flexibility after taking up a stretching regimen I recommended. And he regularly asks for help with his breakfalls during open training sessions.

If you can’t tell, I am super proud of Rick and all he’s accomplished, but I don’t feel like I can take any credit other than creating a dojo where people can feel comfortable training at their own pace. He was the one who found his own inspiration and followed through on it. In doing so, he inspires me and everyone else who trains with him. He gives hope for us all, showing us that it is possible to maintain your Jiu-jitsu training into your senior years. He also gives me the perfect person to point to as an example of what is possible when anyone wonders if they’re too fat, too old, or too out of shape to do Jiu-jitsu.

Now to you: Do you train with any older people or senior citizens at your dojo? How do they fare as students?

30 thoughts on “Can Older People Do Jiu-jitsu? Just Ask Rick…”