Choking While Performing in the Martial Arts (Or Anything!)

Back in 1995, I tested for Shodan over the course of a 6-hour grading along with 20 or so other candidates. It was a long, exhausting test, but I performed well consistently as I proceeded through the test… that is, until I got to the portion covering basic yellow belt curriculum. Midway through that section, I was grabbed in a basic bear hug. I had defended against this bear hug countless times over the course of my years of training leading up to that moment. But at that moment, I paused. I paused just long enough to let the pressure of the situation sink in; all the people watching, all the high-ranking black belts overseeing the grading, the importance of the event. At that moment, the defense I had previously hardwired into my body wasn’t forthcoming. I started go through it in my head like I used to do as a complete beginner. Fortunately, the examiner overseeing this segment of the grading saved me from myself by yelling, “REACT!!!” And react I did. My hardwired skills took over and I didn’t have any other problems for the rest of the grading.

The above is an example of what is commonly known as “choking.” Most people have heard or used this term, but don’t necessarily know what it is exactly or why it happens. Many people who watched last night’s game 3 in the Stanley Cup series between the Canucks and the Bruins said that the Canucks choked, leading to a devastating 8-1 loss. But was this actually a case of choking, or something else entirely? 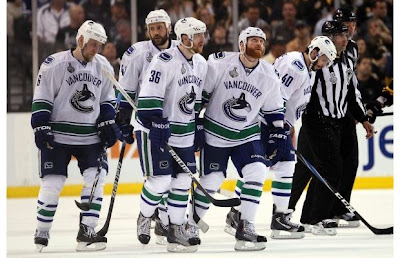 Choking happens for a reason. It’s related to the way we learn and apply skills, as well as how stress affects us. When we first start learning a new skill, we use ‘explicit learning’. We are shown a sequence of movements slowly and mechanically at first, allowing us to grasp the foundations. We then pick up the pace, doing the movements faster, as well as more fluidly. Eventually, we get to a place where we no longer focus on the pattern. We can still get faster and more fluid, but the sequence is learned unconsciously. This is known as ‘implicit learning.’ Fine-tuned skills, like distance, timing and accuracy develop at this stage of learning, aspects that are more intuitive.

When under stress, however, the explicit system can sometimes take over, even though you have a developed implicit system. On occasion, I’ve tested people for a higher belt level and they perform well below their usual level. When I chat with them privately after the grading, before I let them know their results, they usually say, “I know I could have done better.” Nine times out of ten, their less than optimal performance came as a result of nervousness from the pressure of being tested. They lose their fluidity, they second-guess things they know very well, having reverted back to the learning system they used most as a total beginner. By trying to think through all the minutia of each move, they trip themselves up with the details.

With regards to last night’s hockey game, I don’t think the Canucks “choked” per se. It’s not like they were completely botching their plays. There were a few incidents that disadvantaged them in ways that led to points being scored against them and after they got so far behind, they probably just gave up trying, which isn’t the same as choking. That’s losing the will to win, and being two games ahead at the time, they could afford to say to themselves that that particular game was a wash, but they can pick it up again next game. This attitude has its time and place in competitive sports, but not in a real self-defense situation. The “will to win” is a vital aspect of self-defense, and can potentially be the difference between life and death.

In my next blog post, I’ll discuss the importance of the having the will to win psychologically and how it relates to the martial arts.

4 thoughts on “Choking While Performing in the Martial Arts (Or Anything!)”