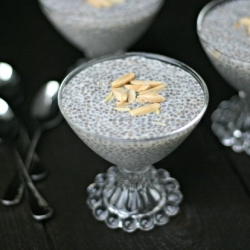 Since last year, I’ve been much more conscious about controlling the amount of refined sugar in my diet. There have been a lot of articles (like this one from CTV linking soda pop to 180 thousand deaths per year) and documentaries like Hungry for Change (Watch this one for sure!) that are unified in their message; we need to cut back! Last year, I wrote a blog post about ways to cut back refined sugar intake, but I sometimes find myself missing sweet treats for desserts. I recently found a delicious and healthy sweet treat that fills this need: chia seed pudding.

Chia seeds are really high in fibre and are considered one of the three “super seeds” along with flax and hemp hearts. They also have the wonderful quality of turning into a gelatinous paste when soaked in liquid, making them a supremely healthy base for a pudding. Because these recipes are so healthy, they can also make for good breakfasts (I particularly like the cinnamon raisin nut and berry based recipes for this purpose.) I have tailored a nice base recipe for the chia seed pudding, and have 7 different “flavour” modifications for different types of puddings, which I’ll share here.

Stir chia seeds into almond milk and let set for 15 minutes. Stir again to work through any clumps. Add protein powder and honey and allow to set for at least one hour (3 hours for best results). Use the combinations below to customize the taste. If you’re avoiding whey protein for whatever reason, try swapping it out for hemp hearts for an alternative source of protein. This recipe and all its permutations makes 4 servings.

Stir in almond extract before letting it set the second time. Top with slivered almonds and serve.

Stir in cocoa powder before letting it set the second time. Top with slivered almonds and serve.

Stir in cocoa powder before letting it set the second time. Top with shredded coconut and serve.

Stir in cinnamon and vanilla before letting it set the second time. Top with berries and serve.

Stir in cinnamon and vanilla and lemon zest before letting it set the second time. Toss berries with lemon juice, add as a topping for the pudding and serve.

Stir in raisins and cinnamon before letting it set the second time. Stir in pecans and serve.

Stir in cocoa powder and peanut butter before letting it set the second time. Stir in chopped peanuts and chocolate chips and serve.

Do you have any other suggestions for different flavour recipes? Please share in the comments. 🙂