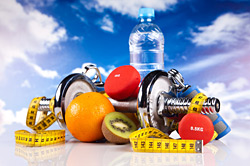 I recently reached a bit of a plateau in my strength training regimen. I had made some decent progress in my strength over the past few months but a few weeks ago I was finding myself sore for several days after working out, with no improvements in my performance. I decided to seek out professional advice from a friend who is a personal trainer. He gave me two pieces of advice that made a huge difference:

1) Make sure you eat 0.3-0.6 grams of carbs per pound of body weight immediately after working out.
2) Don’t do your cardio training and strength training on the same day.

These two adjustments, without making any other changes, vastly improved my energy levels and recovery times. I decided to look into it further to know why it made such a difference.

Glycogen is the energy our bodies use most often for exercise. According to studies (which are cited in this article I used for reference), it is essential to eat enough carbs within 15 minutes after exercising (no more than 30 minutes after) to build adequate glycogen stores for continued training. Waiting longer than 2 hours to eat results in 50 percent less glycogen stored in the muscle. This is because carbohydrate consumption stimulates insulin production, which aids the production of muscle glycogen.

According to the same article, research also shows that combining protein with carbohydrate within thirty minutes after exercise nearly doubles the insulin response, which results in more stored glycogen. They recommend a carbohydrate to protein ratio of 4:1 (four grams of carbohydrate for every one gram of protein) to optimize this effect. Eating more protein than that, however, has a negative impact, slowing  rehydration and glycogen replenishment.

Before you eat, you should should replenish the fluids lost during exercise. The recommended amount is 20-24oz per pound of weight lost. This requires you to weigh yourself before and after working out. This is a good reason for having a scale as part of your workout equipment.

What to Eat Before You Exercise

While it’s not a good idea to exercise on a full stomach, which causes cramps, nausea, and stomach upset, you also shouldn’t be running on empty. If you’re doing an early morning workout, eat something high in carbs that’s easily digestible 20-30 minutes beforehand, like fruit. The closer to the event, the less you should eat. A liquid meal, like a fruit smoothie, can be eaten closer because it’s more easily digestible. More on what to eat before exercise.

For the past couple of months, I had been combining my runs with my strength training. I was running out to the local park and doing my strength training there then running home. The logic was that could get more workouts done on the days I had time to do it. He told me this was a hindrance to my progress. The reason for this is that I was using up my glycogen stores on my run, which I considered a warm-up, albeit a long one, leaving me with less energy to workout with by the time I started strength training. This begged the question: What should I do to warm up? A shorter cardio workout? Not at all. He told me to do similar movements that I do for strength training but with minimal resistance. This seems to be working out well for me.

After only a week of making these changes, I have found that I have a lot more energy for working out and can work out more consistently because my recovery times are quicker. So if you’ve been hitting a wall in terms of your energy and recovery, try some of the above tips. They are simple to implement and can make a big difference. If you do give them a shot, let me know in the comments how they worked out for you. 🙂