When you do a joint lock for real, the best technique is done with minimal movement. The goal is to lock up the joints, not just one in many cases, but multiple joints, so that when you make tiny shifts with your hips from a strong structural base, you get maximum effect. It’s about efficiency and economy of movement, as well as hiding your techniques from the person on whom you intend to apply them. The lock should be felt, not seen. These are concepts that don’t play well on film.

In film movements, the camera only shows things in 2 dimensions. Small movements are easily missed. A basic wrist lock takedown (kote gaeshi) is most effective when you hold the wrist close to your body, lock up the wrist, elbow and shoulder, then make a small hip turn, dropping slightly with your legs as you turn. On film, this move looks so small that it doesn’t look like you’re doing anything. To the untrained eye, it looks fake, as though the recipient is hamming it or just playing along. To sell this move for film, you take the same base of movements but make them bigger, showing the movements with larger circular movement of your arms, rather than the tiny circular movements made with your hands in real application. Check out this video below for example.

You don’t have to actually apply a lock for real when doing it for film. In fact, it’s better that you don’t. You want the wristlock to be seen, not felt. When you start acting into the intensity of the fight, it’s harder to keep a real joint lock controlled, leading to greater potential for injury for the recipient. Instead of gripping the wrist in a way that puts pressure on the joint, it’s better to grab on the wrist so that your hand becomes a brace to help protect your partner’s joint. See the photo below for reference (the left image shows the real thing while the right shows the grip for film). Another factor to consider is your partner’s fall. You want to leave them enough movement in their arm so that they can really sell the fall big to make it look more dramatic. Read How to Adjust Breakfalls for Movie Stunt Work for more on this topic. Rather than locking up all the joints as you would in a real wristlock takedown, you want give them enough mobility that they can do this safely without any risk of injury to their joints. These considerations, of course, are the polar opposite of what you want when you apply a joint lock for real. 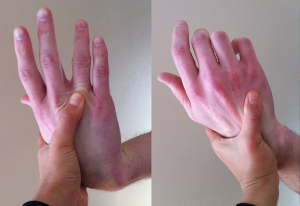 What are some of your favourite movie/TV moments in which joint locks are used? Please share your thoughts or links to video clips in the comments. 🙂