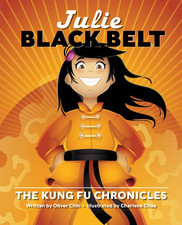 Ok, quick disclaimer. This particular review and this product is really directed at parents of young children who are in the martial arts, or instructors of children. So if you’re not interested in illustrated books for children, then take a scroll through some of our other reviews, that cover things like self-defense and traditional martial arts books, or our ever popular Nutty Buddy review.

This review really covers both books, even though the publisher originally asked me to review the sequel. The first book, entitled Julie Black Belt – The Kung Fu Chronicles is the first book and it takes our young protagonist Julie, and teaches her that it takes focus, patience and hard work to make progress in the martial arts.

The second book, entitled Julie Black Belt: The Belt of Fire picks up where the first book left off – spoiler alert – with Julie continuing her training after receiving her yellow belt. On her quest for her next belt, Julie learns that it’s more important to look inside at your own progress than to compare yourself to someone else. She also learns the value of co-operation.

The illustrations are colourful and fun, and even when the characters are just standing still, there is a feeling of action. The text is fairly straight forward, with few words younger children might trip over.

My review copies were PDFs, but for those of you looking for a version for your iPad, (and it looks great), only the first book is available. Immedium has assured me they are working to get the second version in digital format soon.