My Thoughts About & Contribution to the #LikeAGirl Campaign

When I first saw the Always “Like a Girl” campaign a few months ago (see ad below), I was impressed. They really captured an idea that’s been very important to me in my life. I remember the often used insult among the boys, saying that so-and-so ran, threw, kicked, swung, etc, “like a girl.” From my experience, no one said it to girls as an insult, it was mainly said to other boys (though I realize this also happens). But the fact that it was said as an insult suggested that girls aren’t physically capable and that being “feminine” meant not being good at sports. So as girls started to go through puberty and started wanting the attention of the boys, many started to act in a way that they were socialized into believing was feminine, shunning sports and presenting themselves in a way that was more dainty and helpless. It wasn’t all girls, but many were clearly conflicted.

Those who grew up playing sports or defined themselves strongly through their physical activities didn’t seem to be as affected. During my own formative years, I started to find myself through combat sports, starting with fencing then moving on to Jiu-jitsu. I’m happy I found these activities early in life. More importantly, I’m happy that I had strong female role models to look up to throughout those years. In fencing, there were plenty of strong female competitors in my club. In Jiu-jitsu, my primary instructor when I first started was a teenaged woman with her 2nd degree black belt, who was mentally and physically strong, while being one year younger than me.

The Most Important Influence of the #LikeAGirl Campaign

There has been a lot of criticism of the #LikeAGirl campaign since the commercial aired during the Superbowl. The “Meninist” community complains that it discriminates against boys trying to make headway with a #LikeABoy campaign. Some have even gone so far as to say that women are physically inferior and that they should just accept their place. This backlash is completely ridiculous. At the same time, this backlash has brought more attention to the campaign, which has led to an outpouring of support for it. Clearly, there are more people who think there is merit in its message. 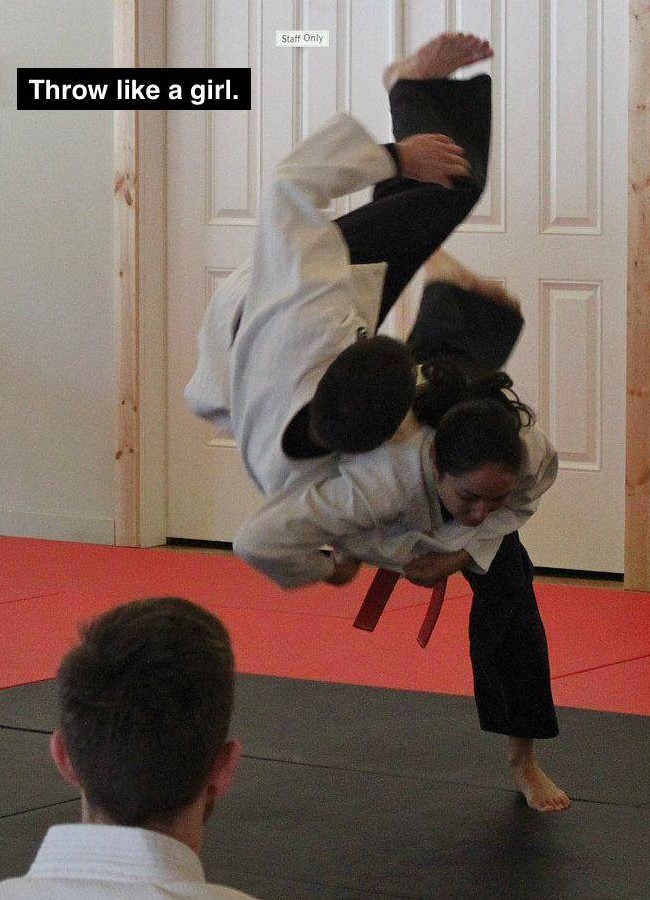 I recently re-watched the video with a girl friend of mine who is a maven in a male-dominated field (WordPress programming). We had both seen it before, and yet we both still tear up a bit during the part when the adult women say they want to re-do their modelling of doing various skills “like a girl,” replacing their flakey, flighty movements with strong, confident ones.

Always, the feminine product company behind the campaign, asks everyone to use the #LikeAGirl hashtag to share photos, videos and stories of women doing their various skills to make the saying mean “doing amazing things.” This is the biggest value of the campaign, in my mind; showing young girls all the different things women can do, that their gender is not a limitation but a strength. When you tell a girl they can do anything they set their mind on, yet they don’t see any women doing the things they have on their mind, part of them wonders if they really can do it. After all, if women can do these things, why aren’t there more women doing them? Young girls need to see role models so that they can expand their vision of what they can do, so that they can imagine their future potential, not limiting themselves to a subset of activities/careers that are “appropriate for their gender.” This is one of the reasons why I like the NWMAF (National Women’s Martial Arts Federation) and PAWMA (Pacific Association of Women Martial Artists) so much. Even if the women who attend these organizations’ annual camps train at male-dominated schools, they get the opportunity to train with, talk to, even find mentors in the field who are women. They do a lot to help support women’s training goals and development, both short and long term.

My Contribution to #LikeAGirl

The martial arts have long been a male-dominated sphere. While more women have started to train in them in recent decades, they are still a minority. Being an experienced woman in the field, I decided to throw my lot into the #LikeAGirl campaign, to support their message and to help encourage young women interested in the martial arts. I don’t necessarily think of what I do as being particularly “amazing” in keeping with the desired association with the hashtag, but it is a tribute to the field and all those who enter it. Below is my own #LikeAGirl video that I put together. Please share it to encourage more girls/women to give the martial arts a try or to help inspire those who have taken steps into that world.

Over to you. I invite you to share your own #LikeAGirl photos, videos or stories of yourself or women you know. Inspire me and all our readers! 🙂

3 thoughts on “My Thoughts About & Contribution to the #LikeAGirl Campaign”