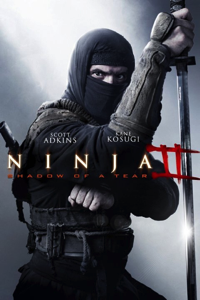 This is a movie that at no point was on my radar until I received the request to review it. Which is unusual for movies that claim amazing martial arts action.

I really wanted to title this review NINJA 2: The Re-Ninja-ing but as I’ve not seen the first one, it seemed unfair.

However, I can probably guess what happened in the first one based on the second one. Guy who trains and gets some ninja skills has some predictable reason to kill a bunch of people using said skills, probably in a particular showy manner, but with efficiency, often multiple attackers at once. Eventually he fights a previously introduced villain with whom he engages in a lengthy one-on-one battle in which he is grievously injured, but manages to prevail regardless.

I’m guessing that’s what happens in the first one because the second one could be described like that with the addition of the natural sequel plot. Our hero has settled down, presumably leaving behind some dark past, and his blissful domestic life is shattered causing him to seek revenge. Martial arts mayhem ensues.

Much like the critical darling The Raid: Redemption, the fights in this are well choreographed, exciting and fast paced. Also like the The Raid the violence lacks a bit of weight as there is a lot of blocking, and bodies generally take more punishment than is perhaps realistic. However, unlike the The Raid, Ninja II has terrible acting when the action lets up enough to allow for it.

The movie swaps between Japanese with English subtitles & English. Which seems appropriate since it flips between Japan, Thailand and Myanmar (formerly Burma. In an interesting side note, the reason we continue to use “formerly Burma” despite the named being changed in 1989, 25 years ago, is because those are the two different names in the Burmese language depending on context, so it helps to avoid confusion for English speakers. There, now you learned something else.)

So is the movie worth watching? Depends on your mood.

If you’re looking for solid action film with a Japanese martial arts flair, then it’s good for a watch through. It’s a martial arts action movie made by martial artists (even the director has an extensive training background) with martial artists, not actors, and it has some really incredible, fast, fight sequences. It also has a sort of classical martial arts movie feeling to it that is hard to describe. I enjoyed it.

However, if you’re looking for a plot driven well acted masterpiece, well I’ll suggest one once I get asked to review one.

I’m curious how this will compare to my next review, which will be of the Keanu Reeve directed Man of Tai Chi which I will have posted next week.

Ninja 2: Shadow of a Tear is available on Amazon.ca and Amazon.com.