Size/Strength vs Technique vs Spirit in the Martial Arts 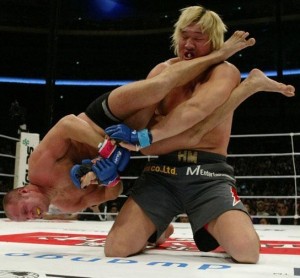 Have you ever gotten frustrated at being unable to apply a joint lock, do a throw, or get good shots in when sparring against someone much bigger or stronger than you? You’re not alone. Many people come to train in the martial arts because they’re looking for something that will help level the playing field for them if they should ever have to raise their hands to defend themselves physically. But after they’ve been training for a while, they still find themselves struggling to do the same techniques that bigger, stronger people seem able to apply more easily. They become disillusioned and often quit because they don’t realize what it takes for smaller people to be successful in the martial arts.

When it comes to the successful use of martial arts applications, whether it’s for self-defense, competition, or just in general training, there are 3 main factors that balance off each other and determine whether or not you will be successful: size & strength, technique, and spirit.

1. Size & Strength. Martial artists like to think that size and strength don’t matter if you’ve got good technique. While good technique can certainly help level the playing field, it doesn’t cancel out the relevance of size and strength completely, as much as we would like it to. The fact of the matter is, a 6’6″, 300-lb muscle-bound behemoth with no martial arts training can realistically pose a serious challenge to a 5’2″,  115-lb woman, even if she has exquisite technique. Does this mean that the larger man with the size advantage is a better martial artist? Certainly not! But everyone needs to understand that it is definitely a factor to be considered when evaluating their performance of techniques. Strength makes it easier to break balance for throws or apply joint locks against resistant attackers. Height/reach makes it easier to land strikes and close in for throws. Weight makes it easier to hold an opponent down on the ground and tire them out. Physical conditioning is, of course, an important part of physical health and personal development and can help you out of hairy situations both in competitive arenas and on the street. It can, however, get in the way of higher level technical development if you only use strength to muscle your way into and out of things.

2. Technique. Technique is a broad term encompassing all the principles that make the martial arts so impressive. It is the application of speed, timing, agility, body mechanics and physics to take down bigger, stronger attackers. The greater your technique, the better able you are at minimizing size advantages. That being said, developing good technique is a long-term commitment. Unless you’re extremely gifted, it can take many years to develop your technique to a high enough level that size differences don’t phase you as much. Students must have patience and passion to keep up with their training despite the inherent difficulties. In the MMA fight between Fedor Emelianenko and Hong Man Choi, the latter’s size advantage was massive, with Fedor at 6’2″, 230lbs facing Choi at 7’2″ 360lbs. Fedor overcame this size advantage by applying his speed, agility and technical ability on ground to get Choi in his guard then apply an arm bar. Check out the fight in the video below. You could, however, argue that his spirit to take on someone so much larger and be undaunted also factored into the results of this fight.

3. Spirit. Spirit is the great equalizer of the martial arts/self-defense world. If your level of spirit is higher than an opponent’s size/strength or technique, it can be enough to overcome advantages of either or both. Spirit is what makes a mother fight off an attacker when protecting a child with a ferocity never seen from her before or since said incident. It’s what makes a person keep their head together while under an attack allowing them to look beyond the fight itself to find factors that will help them win, like using one’s surroundings creatively to give them an advantage. Another form of spirit is having an indomitable will, which can keep a fighter standing after taking hit after hit, dazed and bloodied, but still giving back as much as they’ve got. (It’s also the reason why coaches can throw in the towel for their fighters, because they know they’ll keep fighting even when it’s not safe.) It is the idea of being willing to face any danger or adversity and not back down. It is being willing to die if you take the concept to the extreme. In this extreme case, if a person’s combination of size/strength/technique is greater than that of the person with the indomitable will, they will need to render them unconscious or kill them to defeat them. Spirit is what made Morihei Ueshiba, founder of Aikido, the truly magical martial artist that he was. He drew on a power that went beyond size or technique, a power that baffled all those who tried to disprove his abilities. Spirit takes on many forms. At it’s highest form, I believe it has the potential to overcome size/strength and technical advantages, even without martial arts training. These are the people whose presence alone can be enough to take the fight out of those who would seek to take them down.

Rarely is it one single factor that makes or breaks an encounter, whether it’s on the street or in the ring. A martial artist has to both build on their strengths while not ignoring development in areas in which they are weaker. In my own experience, I have had to learn to overcome the natural disadvantages of my size being 5’4″ and weighing only 130lbs. What I lack in size and strength, I’ve learned to make up for with technique and tenacity. I have applied this both on the mats in training and on actual scenarios in real life. That being said, I still do physical conditioning to make the most of my physical body, even if it will never be enough on its own to allow me to match strength against strength with most men.

Have you had success using technique and/or spirit to overcome size and strength advantages? I’d love to hear about it in the comments. 🙂