Forget What You “Thought” You Knew about Aikido 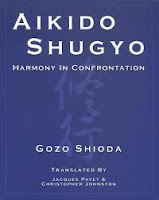 This week I started reading a book, Aikido Shugyo: Harmony in Confrontation, that my friend and mentor Robert Mustard Sensei gave me. Written by the founder of Yoshinkan Aikido, Gozo Shioda Kancho, it provides a personal and direct experience of the man as though he were telling us his stories right in front of us. Each story describes a different principle of Aikido. Some of the principles featured would surprise many a martial artists who “thinks” they know what Aikido is all about, including those listed below.

“Atemi are 70% of a Real Fight.”
This is one of the first principles listed in this book. Atemi, for those of you unfamiliar with the Japanese word, translates to “strikes to nerve centres or vital points.” Ueshiba Morihei himself, founder of Aikido, once said, “In a real fight, 70% of Aikido is atemi and 30% of is throwing.” There is a philosophy of striking that it’s not simply about learning to punch and kick, but to use any part of the body to affect specific contact points. But wait… there’s more.
“The Straight Punch Comes off the Front Knee.”
Whether you’re using a right lunge punch, or reverse punch or any other strike for that matter, Shioda Sensei says that the body’s centre of gravity should ride on the right foot. He says that one must use the knee when generating power by the forward movement of the centre of gravity or else the energy stops there without being transferred into the upper body. This leg engagement is something that is practiced in every Aikido training session. But wait… there’s more.
“Atemi is all timing.”
Citing boxing as an example, Shioda Sensei goes on to explain that oftentimes it is only a very casual looking punch that knocks a guy out. He says that striking effectively is more about “judging an opponent’s changing movements and punching with absolutely perfect timing” and that “if it is timed perfectly, you do not need a lot of power for the punch to be effective.” Apparently Mike Tyson himself saw the benefit of Aikido principles and even travelled to Japan to visit Shioda Sensei’s dojo to learn what he could from the style’s body movements.
These are but a few examples. If these statements intrigue you, I suggest you pick up this book. It is excellent. A great read for any martial artist. I can’t believe I only found it now. It’ll give you a perspective on Aikido that will make you rethink what you thought you knew about it. It is giving me an itch to train in Aikido myself. Good thing I’ll be attending Mustard Sensei’s monthly Kenshu Aikido class at his dojo in Burnaby this Friday. He is also going to teach a special class at my own dojo on April 3, which is an excellent opportunity for my students to experience his knowledge and skill.