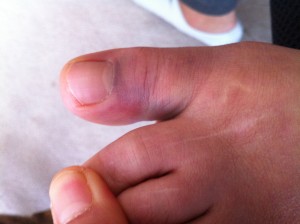 Over the weekend, my dojo was rented by Jitsu Canada to run a local grading. I hold an intermediate rank in their style (Shorinji Kan Jiu jitsu) in addition to being a Can-ryu Jiu-jitsu 5th Dan. Helping out by being a partner/attacker for these gradings is a guilty pleasure. I like helping out by putting a little extra pressure on the candidates while using my skills to help keep them safe while doing so.

Early in the grading, they were doing a striking “V”, basically an intensity drill to test their ability to strike incoming attackers. The candidate was moving in aggressively as I stepped into attack, leading him to step into my foot, catching my big toe and injuring it. It hurt quite a lot at the time, but I tried to soldier on to keep helping out, insisting I was fine. It wasn’t very long afterwards that a white belt happened to innocently step into my foot and bump it slightly, causing me to step off the mats again. Chris Sensei (who is ranked Shodan in that style in addition to Can-ryu) told me I should get off the mats. As I started to protest that I was fine, he asked me would you let one of your own students continue in this situation. I opened my mouth, then closed it again and stepped down.  END_OF_DOCUMENT_TOKEN_TO_BE_REPLACED