How to Train the Use Adrenaline for Martial Arts & Self-Defense 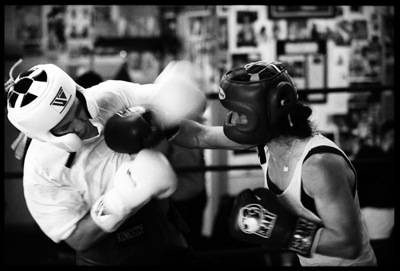 Produced by the adrenal glands in our body, adrenaline is released when the body experiences high-stress mental or physical situations. It stimulates a variety of bodily functions, including increased heart rate, increased blood to muscles and increased oxygen flow to the lungs, etc. It can be used to  increase your performance in sport or self-defense, making you faster, stronger and less affected by pain. It can also enable you to process information while taking actions at a rapid rate, making you more responsive to threats. These reactions, however, are not a given. Everyone has different reactions to adrenaline and the stressful situations that causes its flow. This article explores these reactions and how to train yourself to have more useful reactions for martial arts and self-defense. END_OF_DOCUMENT_TOKEN_TO_BE_REPLACED

How Good Are Your Perceptions Skills?

It is amazing to see the difference that good perception makes when it comes to martial arts and self-defense. People with greater perception are able to see openings that others are not able to detect.

Try the following perception test and see how good yours is:

END_OF_DOCUMENT_TOKEN_TO_BE_REPLACED

3 Things You Must Know to Defend Against Multiple Attackers

The other night, some of my students and I ran through a high-stress sparring drill in which the defender had to defend against multiple attackers. There are a number of different tactics a person can use in a multiple attackers situation depending on their body type and how the situation unfolds, but there are two overarching concepts that are common to everyone are as follows: awareness,positional strategy and heart/aggressiveness.

Awareness. You must stay aware of your surroundings by constantly scanning around you to make up for the effects of adrenaline that can cause you to experience tunnel vision, auditory exclusion, etc, when you’re under the stress of an attack. Read Conditioning the Mind to Look Out for Multiple Attackers for more details.

Positional Strategy. The most important tactical aspect of defending against multiple attackers is to position yourself so that only one person can effectively attack you at a time. Basically, you want to avoid being “monkey in the middle.” You want to avoid moving between your two attackers if it can be avoided.

Heart/Aggressiveness. Being on the receiving end of a multiple person attack, you are at a severe disadvantage. You have to make up for it by engaging the attackers aggressively in the hopes of keeping the fight on your terms. By being aggressive, you might also cause your attackers to hesitate, which can give you an opportunity to exploit them in a weak moment. But it’s not just about being aggressive. It’s about having an abundance of heart, a never-give-up attitude that keeps on fighting in the face of insurmountable odds. You want to have the mindset that no matter how many times you get hit, how hard you get hit, or how disadvantaged things may seem, that you WILL keep fighting and use any and every opportunity you get. Anyone out there a Star Trek fan? Captain Kirk has this idea down.

Beyond the two overarching concepts, there are lots of different types of tactics you can use to survive a multiple person attack: throwing/tripping attackers to the ground, pushing them into each other, holding one while kicking another, attacking unexpected targets, using reach advantage strategically, etc. And this list doesn’t even take weapons attacks into account. But no matter what you do have to, if you should try to be aware of your surroudnings and defend yourself with heart and sound positional strategy,

Students who are preparing to go for their green belt in my dojo are introduced to the concept of defending against multiple attackers. These students have usually been training over a year and have become comfortable with the rigors of sparring in a one-on-one context. But it’s always amazing to me how differently they react when thrown into the ring with two attackers for the first time. It’s an entirely different experience.

A number of new factors enter the picture with the introduction of a second attacker due to the high stress nature of the attack. They are as follows:

Time Distortion. If a defender has no experience dealing with combat stress, time appears to pass very quickly when under attack. If a defender has experience training under high stress conditions, however, time seems to pass very slowly. Since our students have already been exposed to one-on-one sparring for a number of months, they have some degree of experience with combat stress, but with two attackers the stress is ramped up and it’s like starting from scratch.

Tunnel Vision. When a person is under attack, she will focus on what she perceives as the principal threat. It is a zoom-lens like effect that is created by the mind, NOT the eyes. When the mind goes into tunnel vision, it’s very easy for multiple attackers to triangulate a victim, making it hard for her to defend. By training in high-stress sparring against multiple attackers, students can learn to keep a broad focus so they stay aware of all the threats that surround them.

Auditory Exclusion. When under the stress of an attack, a person’s hearing can become impaired to varying degrees depending on how much experience he has dealing with such conditions. This impairment can prevent him from hearing things that are happening around him, further impeding his ability to deal with multiple attackers.

When we do high stress sparring against multiple attackers, we use a number of safety measures to protect both the attackers and defenders. The instructor leading the exercise is equipped with a whistle to ensure immediate halt when she sees a potential safety threat. Certain kinds of attacks are prohibited, including biting, eye gouging, attacks to the knees, back of the head and neck, as well as the spine and kidneys. Extra protective equipment is also used, including boxing helmets, 16-oz boxing gloves, mouth guards, shin guards, groin protectors, and chest protectors.

I was pleased with my students’ performance in their first exposure to two-on-one sparring. Each time they were a defender, they learned something different, whether it was employing pushing and pulling to keep one attacker between the other, trips and sweeps to take an attacker down, or simply using various punches, kicks and strikes as tools to incapacitate their attackers.