The Difference between Panicking & Choking 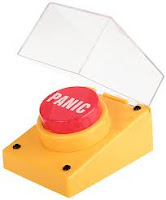 I’ve been on a bit of a psychology arc for the past couple of weeks on this blog. I started with a discussion on what it means to choke and followed up with a discussion on the importance of ‘will to win’ in the martial arts. This week I’m going to discuss what happens when you panic, which is often confused with choking. They are, in fact, very different animals.

As previously discussed, when you choke, you over-think your actions. You bring yourself back to a beginner’s mindset, mentally planning all the details of your moves. If you have moved beyond the explicit learning of a beginner and moved on to the higher level development of implicit learning, you lose your grace and fluidity of movement, as well as the quick reactiveness that comes from relying more on your intuitive mind.
Panicking, on the other hand, is quite the opposite. When it occurs, you stop thinking, reverting to base instincts. You experience perceptual narrowing, often focusing on one single thing. This is one of the reasons multiple attacker situations are so dangerous. People who don’t have experience dealing with these types of situations experience physical symptoms of perceptual narrowing, including tunnel vision and auditory exclusion. They focus entirely on one attacker and then are blindsided by the person’s buddies. Another common example is dealing with a knife attack. Even people with some training have been known to make the mistake of grabbing at the knife as it comes at them, focusing on the blade as the primary threat. There are, of course, better options, such as using physical barriers, creating space, controlling the arm holding the knife, etc. But when panicking, many people only see the knife, so that is what they try to grab, despite the inherent dangers of doing so.
I’ve also seen people panic on belt tests. For example, I might ask a candidate to do a technique again, telling them that they’ve done something wrong. The stress of this makes them panic, so what do they do? The exact same technique performed incorrectly in the exact same way of course! These people usually say afterward that they knew as they were doing it that they were making the same mistake again, but felt like they just couldn’t stop themselves.
So what can we do to prevent panic? Train lots… then train some more. Create training situations that allow you to experience higher levels of stress. Train to deal with multiple attackers. Train to deal with knives and other weapons. Though most dojos wouldn’t dream of doing it now for liability reasons (nor am I endorsing it as a practice), historically some dojos even used to use real knives in training (doing all movements slower and with far more control of course) just to give students the experience of dealing with the psychological stress that comes with a real knife.
People with a lot of experience tend not to panic, because when the stress suppresses their short-term memory they still have some residual experience built onto useful instincts they can draw on. The more you train, the less likely you are to panic. Choking is always a potential hazard though when stress rears its ugly head. While panicking and choking often look the same to the outside observer, they result from very different things going on inside your head. I hope this article helps you recognize the difference.
Want to know more about choking vs panicking? Here’s a great article I read for reference in writing this article.

2 thoughts on “The Difference between Panicking & Choking”