The Importance of Sparring for Developing Distance, Timing & Reflexes in the Martial Arts 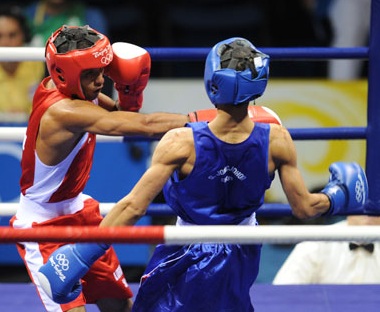 Over the past couple of weeks, I’ve been doing some fencing teaching for a group of stunt performers. There is a film that is going to be shooting in our area that requires a group of women who can do sport fencing. Having done lots of fencing in my past, I was asked by a stunt friend of mine who is also a fencer to help him out by teaching some stunt women some foundational skills to get them up to speed for this film in addition to being considered for it myself. I was happy to oblige.

All of these women had little to no experience with sport fencing, but most have some sort of martial arts background. Even amongst the martial artists, some were able to pick it up faster than others, the ones who trained in sparring as part of their practice.

Sparring teaches the distance and timing of striking very effectively, more so than any other form of training. It is an important element that I believe should be present in any form of martial arts training that has a goal of teaching self-defense. Having a strong understanding of distance, timing, as well as quick reflexes, allows you to better improvise physical defenses in a variety of self-defense scenarios if you stay alert and aware. That’s the reason why the women who had sparring experience did better when it came to learning to fence. They already had a sense of when to attack and when to retreat, of when they had the best opportunities to reach me to land a point, and when they themselves were safely out of reach, in what positions they would have the best control of my blade when they parried or when they were vulnerable to being controlled themselves. Yes, having the sword in hand made it somewhat different, but their base understanding of distance and timing and the quick reflexes they had developed from sparring helped them make adjustments more quickly.

Of course, sparring isn’t the end-all-be-all training tool. Just because you’re good at sparring, doesn’t mean that you’ll be able to handle yourself in a real street confrontation. Sparring is done in under controlled circumstances, usually one-on-one (though we also do sparring with multiple attackers), with lots of protective equipment, facing off against a training partner who is using similar tactics that you have learned and without the heightened emotional states that can come when you’re truly in danger. Most attackers in real situations have no training and don’t necessarily fight in predictable ways. They may attack when you’re distracted, turned away, or with a group of people. They won’t likely be following the rule system that is usually agreed upon when sparring in the dojo. They also usually won’t hold back if you get hurt. One martial arts school made a video to highlight where sparring falls short in real situations (admitting at the end that it does however have it’s place in training). It takes the argument to ridiculous extremes, but it does make a point. Check it out below.

As with all things, the best answer is somewhere in the middle. It’s important to do some form of controlled self-defense drills to teach you skills for defending against specific situations, but to also include some forms of sparring to teach you principles of distance and timing and to speed up your reflexes, all of which are important for improvising physical defenses on the fly.

How does your school strike the balance between sparring training and choreographed defenses? Please share your experiences in the comments. 🙂