What Nail Polish & Nude Photo Leaks Have in Common – Part 1 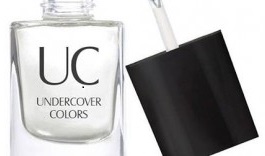 While I was driving home yesterday, a Vancouver radio announcer on 99.3 The Fox started commenting about the nude photos of Jennifer Laurence and other celebrities that were leaked by a hacker who had obtained them by criminal means. He went on to say that of course it wasn’t right, but who in their right mind would store their nude photos on a Internet-based storage system. He later talked about whether or not it was right to look at said photos, going on to admit that yeah, he was a bad man and sneaked a peek.

Rewind to last week. On Facebook, I saw articles about a new nail polish that had been invented that detects the presence of date rape drugs in drinks. The developers make the following claim on the Undercover Colors Facebook page: “With our nail polish, any woman will be empowered to discreetly ensure her safety by simply stirring her drink with her finger. If her nail polish changes color, she’ll know that something is wrong.”

On first glance, it may be hard to see the connection between these two things, but both of these media stories are manifestations of rape culture. This is part 1 of 3 articles and I’ll be returning to these particular stories in article 3.

What is “Rape Culture”?

While I was teaching at this year’s National Women’s Martial Arts Federation annual special training camp, I also attended some courses related to empowerment self-defense. This is where I first learned the depth of a problem referred to as “rape culture” and how deeply embedded it is in society. Rape culture is “a phrase used to describe a culture in which rape is pervasive and normalized due to societal attitudes about gender, sex, and sexuality. Examples of behaviours commonly associated with rape culture include victim blaming, sexual objectification, trivializing rape, denial of widespread rape, or refusing to acknowledge the harm of certain forms of sexual violence that do not conform to certain stereotypes of stranger or violent rape.” (from Wikipedia).

At first blush, most people would say that western culture does not embody rape culture, and while it may not be as pervasive as it is in other countries where women are more overtly oppressed, you can’t ignore statistics. According to the CDC, 1 in 5 women survive rape or attempted rape in the United States alone. And that’s just rape specifically. Many of my fellow Canadians would be quick to point out that violence isn’t as big a problem in Canada as it is in the States. The truth of the matter is, while overall incidences of crime in Canada is decreasing, sexual violence against women is still pervasive. According to the Canadian Women’s Foundation, half of all women in Canada have experienced at least one incident of physical or sexual violence from the age of 16. While most people I know are staunchly against rape, as are most people, most people in western society in some way contribute to an overall cultural view of women that supports rape, though not in the ways people would imagine.

It’s easy to look at rape culture as being a problem of “male oppression,” but there is more to it than that. Men have their own gender socialization issues that influence the decisions they make in terms of how they interact with the men and women around them. A great many men react unhealthily to the pressures of society to “be a man.” Of these men, some internalize them leading to emotional repression, anxiety, depression and other mental health issues. Some will externalize them and try to take control of their surroundings by trying to impose their will on other people. Some will use violence to do so. The predatory mindset is a by-product of that. Those who act out on that mindset physically often choose women as targets because of the way they’re objectified sexually and see them as natural prey. They impose what they consciously or subconsciously consider to be their natural right based on the messages they receive from society. Regardless of the social influences, it is wrong and should not happen, but we must consider male gender socialization as part of the overall problem so we can address it with educational programs for our youth to help them grow up to be confident, emotionally balanced men with a healthy respect for both men and women in their lives. I was happy to see that the makers of Miss Representation are also in the final stages of completing a new documentary about male gender socialization issues that need to be addressed. You can see the trailer for it below.

All across modern media, women are measured by their physical attractiveness, from advertising to politics. This over-emphasis on how women look, portrays them as sexual objects, sometimes overtly, sometimes tacitly. The documentary Miss Representation gives a really expansive overview of all levels of this problem. Below is a trailer with its message condensed, but I highly recommend watching the full movie (available on Netflix).

The Sexual Objectification of Women

It may start with the media production and consumption, but individual people play their own role in perpetuating the sexual objectification of women. Both men and women play a part. There are obvious examples of the kinds of activities people do in their daily lives that objectifies women, like cat-calling or making jokes or boorish statements about women’s appearances, that many self-respecting people wouldn’t engage in. But there are subtler ways that men (and women) objectify women that they don’t even realize they’re doing.  Making evaluative statements about women’s appearances is something most people do regularly, from complimenting a woman on their outfit to telling a little girl how cute she is. When women and girls hear these types of things about themselves or about other women so often, they are more likely to fall into the perception that women’s looks are more important than other parts of their lives, leading to confidence issues related to their identities being more wrapped up in their appearances. Many women feel the need to cater to this attention to “succeed” and feel good about themselves. Some might baulk that there is nothing wrong with paying a compliment that’s well-intentioned. The problem is that many women receive much more attention on their looks than other aspects of her character and life. Reducing women to the sum of her appearance (sexually or otherwise) lays the foundation for sexual objectification.

As this topic is quite complex and requires a look at the many different facets of the problem, I’ll be continuing this topic in next week’s blog post in which I will be discussing victim blaming as part of rape culture.