What Nail Polish & Nude Photo Leaks Have in Common – Part 2

Last week I started discussing what rape culture is and the gender socialization issues for both men and women that contribute to its perpetuation. This week I’ll be going into more detail about specific issues related to rape culture, starting with victim blaming.

Understanding the Problem of Victim Blaming

The idea behind victim blaming is that by engaging in certain behaviours, victims are inviting crimes upon themselves. It is not limited to sexual assault crimes, but it is a cultural norm for them.

While I was attending self-defense lectures at the the National Women’s Martial Arts Federation 2014 training camp, I had the opportunity to speak with dozens of women who work at trauma centres that help women who have been raped. These women told me that time and time again they hear women talk about how fathers, brothers, friends, cops, etc, tell them that they should not have engaged in such risky behaviours in dealing with them as rape victims. Unless you’ve been through it, work with or spoken to people who have, there’s no reason why you would know how common it is. Here are some examples rape victims commonly encounter:

These are things they are told by friends/loved ones, even police officers. They are also judgments that are commonly made in the media by news reporters, radio personalities, bloggers, etc, and points of question by legal defense attorneys defending rapists. In the case of friends and loved ones, particularly the men in their lives, they ask “Why did you (fill in the blank with any perceived risky behaviour)?” because in some way they feel responsible for protecting the women in their lives, and if they got raped, they feel like they failed in some way. Psychologically, it’s easier to accept that the woman failed to keep herself safe than it is for the protective figure to think they failed to keep her safe. This is, of course, ridiculous. No one, man or woman, parent, relative or friend, is responsible for the victim’s rape, unless they committed it themselves or knowingly took actions that allowed it to happen.

As a reader of my blog, you probably train in the martial arts or self-defense and/or believe in defending the rights of those who have had theirs violated. As such, you’re probably thinking, “That’s crazy. Who in their right mind would blame the victim after what she’s been through? I certainly wouldn’t. It can’t possibly be the norm.” You may have never have been put in the position to know what you would or wouldn’t say. But even if you haven’t, many people are more willing to say those types of things about someone they don’t know personally. They make judgments based on the limited details of a case that are publicized by the media. It’s easy to think that you have taught your daughter better (for example) and that this girl you don’t know hadn’t been taught properly by her parents. Or that this would never happen to you yourself as you would have been more aware, more careful, etc, if you had been in that scenario. This is the same logic, whether you’ve had the chance to apply it to someone directly or not. Below is a classic example of modern victim blaming. Take note that they say they don’t “blame the victim,” but they insist that victims should take personal responsibility, which is just a softer, more socially acceptable way of blaming victims.

The Flawed Logic of Victim Blaming

If someone is a victim of identity theft, do we turn around and say, “Well, that’s what you get for using credit cards.” Of course not. Using a credit card is a freedom we believe we are all entitled to in our society. But because of the gender socialization in our society (as discussed in my last post), we have accepted that men are inherently aggressive and not all men are able to control themselves sexually, so it’s up to the women to behave in ways that will not encourage it or take measures to prevent or stop it.

1. It protects sexual predators. When we make statements like “Some men just can’t control themselves,” it enables those who choose to commit crimes. So many predators are dismissed, protected, or otherwise not held accountable because of this logic. As a result, it makes it hard for justice to be served as these attitudes are present in police services, in governments, in courts and all across the media. This weight bears down on the victims who decide to seek justice for the crimes committed against them. A group of female celebrities in India got together to make the very damning video below about the rampant victim blaming of rape victims in their country. And while their situation may seem more extreme, and that more apparently overt cases of rape are dismissed, rapists are rarely held accountable for their crimes in western society as well. (We’ll be covering this point in more detail in next week’s blog post, so hang tight.)

2. It takes away women’s freedoms. Because of victim blaming, society focuses more on teaching women things they should and shouldn’t do to prevent rape. Here are a few examples:

The list goes on. In truth, the vast majority of the time, doing these things does not lead to rape. The only thing that is consistent in rape is that a person made the choice to commit the crime. This being the case, we should be spending a lot more time and energy teaching our male youth to respect women as equals, and how to build true self-esteem rather than feeling that they need to exert power over everyone around them to “be a man.” But this isn’t what we do. We focus on teaching women not to engage in various behaviours that are perceived as risky, setting women up to be blamed when rape does occur. All that being said, we do live in a complicated world and a society in which violence does occur. It is up to each person how they choose to navigate through it as best they can and live life on their own terms. One woman may wear pants because they prefer the comfort and mobility. Another may prefer short skirts because they like the style. That is the freedom of choice. The skirt wearer should be able to do so without fear of reprisal (and most do). Personal choices are not what enables the rapist. Rapists enable themselves by their own actions. Below is an infographic I saw on Facebook a little while back that serves as a good reminder. 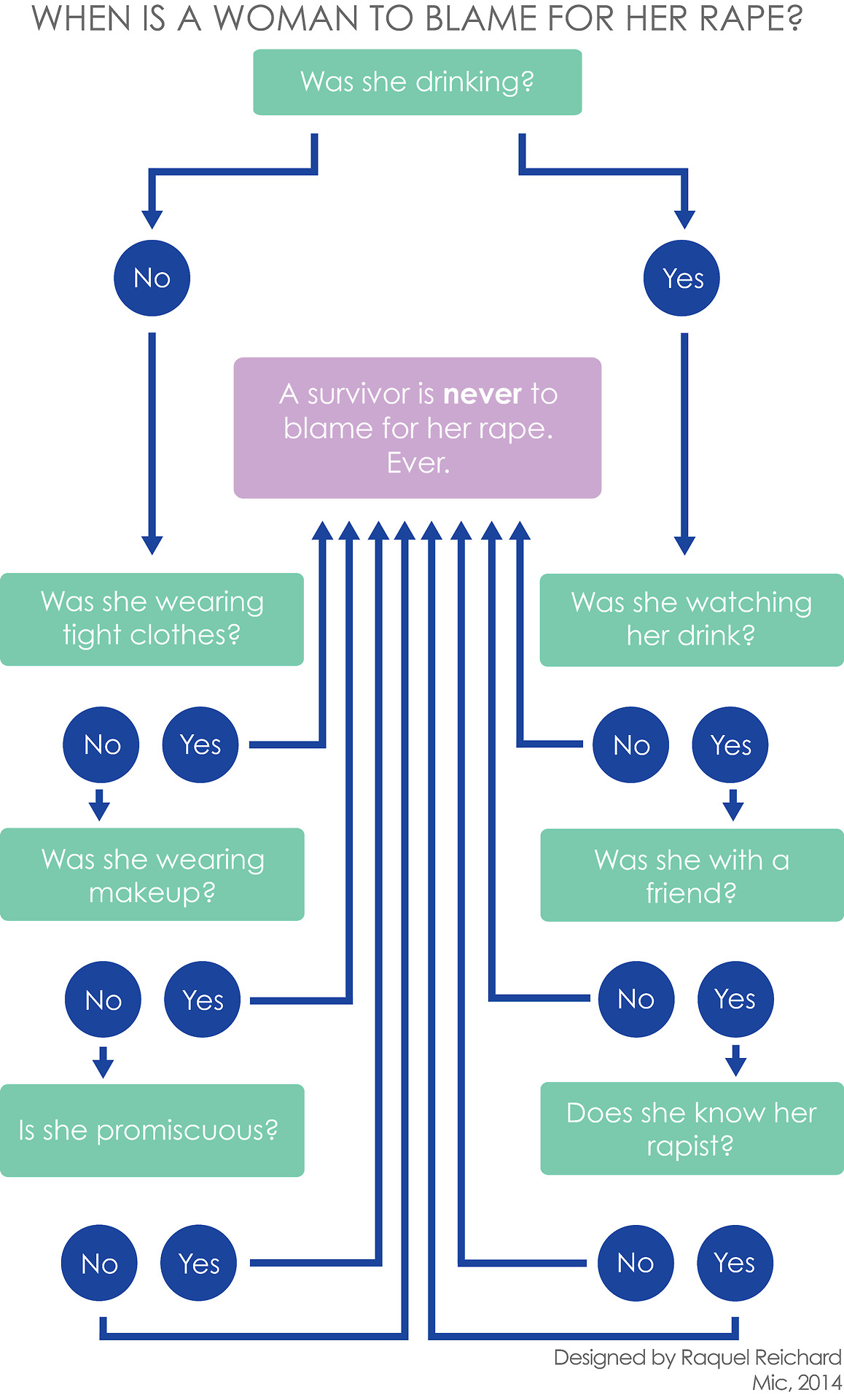 3. It victimizes the victims. With the way society protects the predator and everything women are taught about how to prevent rape, it’s not hard to understand why so many rape victims choose not to report the crime. Many rape victims blame themselves for not being more careful, having internalized the messages everyone is fed. Rather than making the predators responsible for their crimes, victims often suffer in silence for them. According to an analysis of US Justice Department data, RAINN (Rape, Abuse & Incest National Network) determined that 97% of rapists walk free, never spending a single day in jail for their crime.

Let’s go back to what my local radio personality said about the case about Jennifer Lawrence and the other female celebrities who had their nude photos stolen and publicly released against their will over the Internet. While it wasn’t rape, it was a sexual crime and is being looked at through the same lens that rape is looked at. The crime happened because a man chose to hack their accounts, steal their photos and publish them. They weren’t “asking for it” by taking nude photos or by putting them on an Internet-based storage service. And no one should be suggesting otherwise. The radio announcer also made the choice to view the photos and then share this info with his audience. This was despite his agreement that it was wrong for the hacker to commit the crime of stealing and sharing them. And while it is a less extreme example, his joking trivialization of his own tacit approval of the crime is yet another example of the “men will be men” attitude that serves to support rape.

If you’re looking for an exercise or a more detailed way to illustrate victim blaming, check out this one by StopRelationshipAbuse.org. It does a good job of walking you through the flawed logic of victim blaming by showing the type of questioning which a rape victim is often subjected but applied to a mugging situation.

Next week, I’ll be finishing off this topic in a 3rd article with a look at the widespread misconceptions of rape and what this means for people who want to do what they can to help prevent it.