I hate running. Hate it. With a passion. Stationary biking is only slightly better since I can watch TV while I do it, but there is only so much cardio I can squeeze out of biking without attending a spin class. Running really is a necessity, especially with an upcoming physical test, so anything that motivates me to go out running is good.

My knees aren’t the greatest, and a doctor student of ours, who is also a triathalon enthusiast developed a running program for me to help ease me into running. It failed. Not because it was a bad program, but because when I’m running, I want to listen to music, find a rhythm, and not stare at my watch.

I guess I lack the discipline for running.

So earlier this year I tried working her program into the Zombies, Run!
iPhone application, hoping the video game and story elements would help prod me along. I was still stuck looking at a watch, trying to get my interval running in, while listening to the story and avoiding zombie swarms. I eventually fell off the wagon before the program took root. 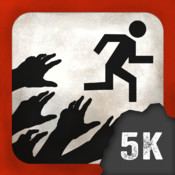 Fortunately, the fellows over at Six to Start came up with another application as part of their Zombies, Run! universe, Zombies, Run! 5k Training App
. The idea is that within the world of Zombies, Run! you develop your running level over an 8-week program and at the end you’re running 5 km.

I liked Zombies, Run! and it almost worked, so I thought, at $3.99 CDN, I might as well give this new training game a try.

I’m now about to begin week 5, and I have to say, it’s managed to do it. It got me over the hump of my distaste for running to the point where my body now craves a run, and I get restless if I don’t run every second day. It’s gotten to the point that last weekend when I went climbing during the afternoon, I made my wife and I late for a social engagement that evening because when we got home, I still had to go for my run, because I knew I’d be irritable and restless otherwise.

Ok, so enough blathering about my own motivation, what’s the game like?

The story takes place between the 1st and 2nd mission from the original Zombies, Run! game, but if you’ve never played the original, it includes an introduction mission to bring you up to speed and introduce you to all the characters. You take on the role of runner 5, a recent addition to the town of Abel, a small bastion of survivors of the zombie apocalypse. The town’s doctor takes you under her wing to get you in shape so you can become a contributing member of the town as a runner, the people who brave the zombie filled wilderness in search of supplies, etc.

So how’s the training?

Each run starts with a walk before moving into running drills or free running. The drills include interval running, which begins with short timed runs interspersed with longer walks to catch your breath, and these times change as you get further into the program.

I’ve heard criticism that the program starts too easy for people who are already moderately active. I would disagree. While it begins very low with very basic interval running, especially during the first week, every run has a “free run” segment at the end where you’re encouraged to listen to your body and walk or run as needed. This is an opportunity to push yourself if you’ve found the running drills a little too easy.

And don’t worry, once you hit week 3, the program ramps up enough that you’ll be feeling it. At the end of week 4, I now routinely cover over 6km with my running and drills included. And by starting a free Zombies Link account on their website, you can compare your runs, track your progress and easily post your results to facebook and Twitter if you’re so inclined.

There are some bugs that occasionally pop up; the app doesn’t like playlists with over a couple hundred songs, (yes, this is an issue for me), and once after a very long song, the music just stopped. I’ll admit I had difficulty finishing the run, being able to listen to my own mortality in the form of gasping breath and noisy knees. But considering that this app has done what nothing else has been able to do, get me running regularly, well, the occasional hiccup is easily overlooked.

I heartily recommend this app if you’re looking for a way to get into running. I’m looking forward to finishing my 8 weeks and jumping back into the full game, and actually being able to run the missions properly.

Interested in other phone apps that can help you develop both physically and mentally? Check out Lori Sensei’s article, 7 Useful iPhone Apps for Mental & Physical Health.

One thought on “Zombies, Run! 5K Training for iPhone Review”