Danger Cues You Can See to Prepare You for Self-Defense 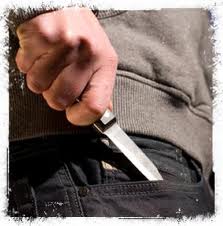 I’m what I like to call a little blind. My vision is close to perfect, but at a distance things become a little fuzzy. I always joke the reason I wear glasses or contact lenses is so I can tell the difference from a garbage bag and a black bear from a kilometre off while driving. I know, it’s not very funny.

Last week, Lori Sensei discussed how taking your eyes out of the equation can help you learn techniques that require a great deal of tactile feedback. That your eyes can sometimes provide you with misleading information, making it more difficult to do a joint lock. Today I’m going to look at the importance of vision in self-defense.

While I am only a little blind, I always wear corrective contact lenses when I work security. I primarily work event security, which usually entails the consumption of alcohol by patrons. Over-consumption by these patrons can occasionally lead to aggressive and assaultive behaviour by patrons against each other or event staff and security.

I like to have every advantage possible when it comes to reading body language and danger cues when dealing with potentially violent patrons. I prefer to wear contacts while working security because I don’t have to worry about my glasses being knocked off, and from what I’ve witnessed, wearing glasses does not dissuade people from taking a swing at you. Here is a link to a limited time coupon for contact lenses if you’re interested.

I wrote about 5 potential warning signs preceding an attack a couple of months ago, and I’d like to take this particular chance to go a little more in-depth on the body language side of things so you know how to use your vision. Here are some examples of what to look for.

1) The physical signs of adrenalization: When someone gets ready to fight and they receive a dump of andrenalin, the body undergoes a series of changes, and they manifest exterior signs. As the body draws blood to the organs, the subject may lose feeling at the ends of their fingers. This is why people getting ready to fight may flick their fingers, in an effort to regain feeling. Their body is also telling them to fight or run, and they have energy, so they may start pacing, or shifting back and forth on the balls of their feet. Their nostrils may flare as they’re body endeavours to take in more oxygen. A change in breathing patterns can also be a sign, deep long breaths or shallow quick breaths can also be an indication of an impending fight.

2) Readying to move: If they blade their stance, square off to you, or starting clenching their fists, that’s a pretty good sign of an impending attack. They may also shift their weight onto a leg, or drop their shoulders, tense their jaw, or tilt their head forward. A puffed chest, shoulders drawing back can also be a precursor to a punch.

3) Eye cues. They say the eyes are the window to the soul. Their intentions may be clearly written in the focus of the eyes. If they’re looking very pointedly at a specific part of your body, like the groin, then an attack to that spot might be coming. If they’re giving you the 1000 mile stare, looking straight through you, they may be de-humanzing you, and potentially preparing a strike. Likewise, a quick glance away, or breaking eye contact can be an attempt to make you look away so they can sucker punch you.

4) Hand movement. We covered hands in both signs of andrenalization and readying to move, with the flicking of fingers, or clenched fists indicating a preparation for an attack. Bringing the hands up into a guard is a pretty obvious sign. Disappearing hands, hands reaching into pockets or going towards the waist band of the pants can be going for a weapon. If someone is talking to you and does not remove their hands from their pockets, that can be a sign as well, as people generally take their hands out when they’re talking to someone else. Keeping your hands in your pockets is an anti-social behaviour. Or they could be reaching back, cocking a fist for a punch. If the subject pats their pocket, that can be a warning sign as they’re performing a security check, confirming that a weapon, usually a knife, is there and easily accessible. Picking up an improvised weapon, whether it be a bottle, drink, pool cue, etc, can be a sign. Or if they put their drink down. Pay close attention to peoples’ hands since they generally deliver the majority of the damage in the beginning of an assault.

5) They stop talking. Ok, this is less vision related and more listening, but when someone who has been talking, or yelling almost non-stop suddenly stops, you can almost see the thought process as they think about doing something, like hitting you.

This is by no means an exhaustive list. There are plenty of other things, like sweeping a hand across the forehead “slicking back the hair” which prepares their hand for a sucker punch, etc. The general idea is to pick up behaviour that is unusual. Also, listen to your instincts. If the hairs on the back of your neck are going up, chances are the person causing the stress is demonstrating one or more of these body language cues, which you may be registering on a subconscious level.

Are there definite cues you’ve seen from your experience that you felt should be listed? Have you ever encountered any of these cues? Please share your experiences below.

Tags: signs of an impending attack