How to Make Safe Contact that Sells for Camera 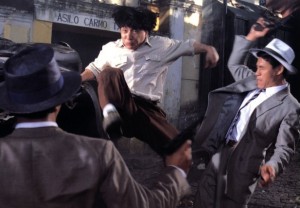 I’ve been training to improve my form and structure to make my punches hit harder for 22 years. I know what it takes to hit with heavy hands and have worked hard to do so. But for film you want to “fight light.” This is a skill that can be a challenge for trained martial artists. While a trained practitioner may know better how to look the part because they know how to do it for real, they have to be able to do so, and even make contact, without making impact associated with it. Here’s what I’ve learned about doing that.

Use Good Technique… And then Some

Trained martial artists all know that a punch isn’t swung from the arm and shoulder. Power comes from the legs and is directed from the hips then expressed through the arm. To sell a strong hit for camera, you do all these things, exaggerating them further than usual, making the movements bigger and therefore more obvious for camera.

Intensity in Your Body Language

When applying martial arts for real, whether in competition or in self-defense, there are times when you might be better served keeping a cool demeanor and showing minimal emotion. And while there may be times you want to do this for film depending on your character, more often than not, you’ll probably want to use emotional intensity to sell your strikes. This involves some acting, both in your facial expressions and body movements. The same goes for the person receiving the blows, which is also an important part of the equation for making your strike sell.

Leave Fists Loose with No “Time on Target”

These are more principles that is the exact opposite in film fighting as you would want to do in real fighting. When making contact intended to injure, you usually make your fist strong on impact. This is the exact opposite of what you want to do when fighting light for film. You want to keep your fist loose and relaxed so that any contact you do make doesn’t transfer through your fist. Also, when making a body shot for real, you usually leave your fist on the contact point for a split second to allow the fluid shock waves to transfer from your strong fist or other striking surface into your target. Since you don’t want this to happen in film, obviously you wouldn’t let your strike sink in. On top of that, sinking a strike in involves less movement, making it less visible to camera, whatever the reality. So in addition to not sinking the strike in, you’re better off actively bouncing the strike off your target. It may sound strange to a trained martial artist, but the extra movement makes it looks so much more real on camera, particularly when combined with the receiving stunt performer’s reaction to the strike. Bouncing the punch out also keeps the punch’s movement from being covered up by the recipient’s movements in reaction to it. I train this method of landing hits lightly by working with a willing (and trusting) partner or with my B.O.B. It makes a great warm-up. Below is a video of me showing the difference between hitting B.O.B. for real then showing hitting light for film.

When you or your partner are blocking or landing a strike, whenever possible, do so using muscle groups rather than boney parts. For example, some styles of martial arts might teach to turn an arm outward into a block in order to drive their forearm bone into an attacker’s nerve point in the process of a block. Since we don’t want to hurt our partner, we wouldn’t so this for a film fight. Instead, you would take the shot with the fleshy parts of your forearm, tricep or shoulder so your partner can safely bounce their strike off your body. As an attacker delivering a hook punch or haymaker, you can make help facilitate this by arching your punch and making contact with your inside forearm rather than your fist to make the impact even safer for your blocking partner.

These are only a few tricks stunt performers use, and they do take a lot of training them to make them look realistic for camera. I specifically work on my film fighting skills several times a week to keep my skills sharp and continue my development as a performer. Doing stunts is a career and if one decides to give it a shot, be prepared to work your butt off because it’s a lot harder than most people think.