The Importance of Role-playing in Martial Arts Training

This past weekend I taught at the Canadian Jiu-jitsu Union summer camp, an event featuring 10 hours of training over 2 days with 8 instructors. I usually like to work with a particular theme and this year I worked with the theme of being a role-player. By role-player, I don’t mean playing games like Dungeons & Dragons though I do think that the martial arts attract many such players. But even if one has never touched such games, if you train in the martial arts, you’ve probably been a “role-player” at some point.

When we train in the martial arts, especially when training scenarios for self-defense or competition, we often take on roles, usually in the form of attacker and defender, or uke and tori (terms used in Japanese arts). These roles can take on many different forms.

When we play the attacker so that someone can practise self-defense techniques, we often start with a particular attack, say a two-hand wrist grab, as demonstrated in this video by Steve Hiscoe Shihan. When working with beginner students, we play the role assuming the defender does everything right and that we as the attacker react by the book with no unexpected twists. The shin kicks distracts the attacker, loosening the grip so that the defender can easily smash the wrists together then follow up with palm strikes to the nose and a takedown making for an easy escape.

But real attacks rarely go “by the book.” Attackers do unexpected things and we want students to be able to adapt to the changing circumstances rather than sticking to scripted defensive tactics. So in my seminar, I taught students to make changes to their roles so that students can learn to make adaptations. The first change I taught was that it is quite possible that if you kick an attacker in the shins who has grabbed your wrists, they may just be surprised and let go completely. If they do so, it doesn’t make a lot of sense to go through the punch-down motion intended to break the wrist grib, though I have seen people do this in training when someone lets go unexpectedly. I had the attackers at the seminar take on this particular role, encouraging students to skip the punch-down, following straight through to the palm strikes to the nose and takedown. For more senior belts, I had them let go of the wrists then throw a big haymaker punch in response, giving them the opportunity to react to an attacker’s change in tactics.

I taught a wide variety of different modifications one can make to the role of attacker along with appropriate responses as the defender. In one scenario, an attacker steps out of range to avoid the palm strikes, for which I taught the defender’s response of an angled stamping foot kick to the knee or anterior femoral depending on the severity of the situation. In another scenario, the attacker put their arms up to shield their face against the palm strikes, for which I taught students to change their target, demonstrating a double handed ear slap or punches to the solar plexus depending on what targets are most accessible. I also taught students the concept of switching to a different type of throw or takedown if the attacker counters your takedown attempt (below is a photo of me teaching a scooping throw or sukui nage as a response to a countered takedown at last weekend’s summer camp). Some of these concepts are covered in more detail with accompanying video in my blog post How to Add More Realism to Your Self-Defense Training. 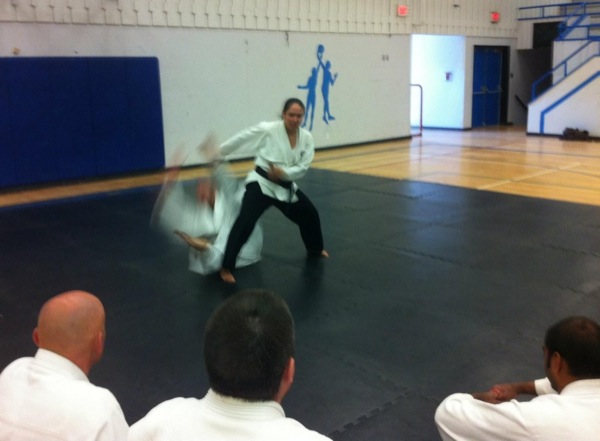 At the end of the seminar, we took a few minutes to train a bit more free form. I told them to start with the same attack, but make adaptations to their attacks without the person playing the defender role knowing what ones to expect. This allows students to train self-defense tactics in a more “live” manner, so that they get away from scripted material and get a better sense of realism in their training.

Role-playing is just as important in the competitive training arena as it is in self-defense training. In order to learn how to defend against a triangle for example, you have to let someone put one on you so you can go through the motions. If all you do is practise live training, you don’t necessarily get to learn specific defenses or improve your technique because your training partner may not give you the opportunity without consciously taking on the role. And of course, if your partner doesn’t respond in the prescribed way, the particular tactic you use might not work. They may shift their weight in a different direction or have a limb in a weird position that blocks the technique, or they may just be a certain body type against which the technique is not appropriate.

When training specific tactics, you have to keep in mind the specific roles the attacker and defender are playing. If a ground grappling technique, for example, assumes that the attacker is going to shift their body weight a certain way, the person playing that role should stick to that reaction. Changing the attacker’s role  by shifting their body differently can stuff the technique, preventing their partner from being able to practise the move in question. Of course, sometimes the attacker changes the role unintentionally so it’s always good to put these situations to question with your instructor so they can show the defender what adjustments to make in such cases.

The roles we play in the martial arts are vital to our development. They allow us to practise self-defense and competitive tactics in a safe, controlled environment. There are so many different roles we can explore in classes, making for a more dynamic training experience. You can give the defender the role of a law enforcement professional making an arrest on a much smaller individual that is violently resisting arrest. You can give the defender the role of being a guest at an office party at which their drunk boss starts to push them around. These examples, of course, give students the opportunity to explore different levels of force that might be more appropriate for a given situation. There are so many different types of self-defense situations to explore, and role-playing is a great tool with which to do so.

Have you ever trained taking on variations in attacker-defender roles at your martial arts school? Please share your experiences in the comments.