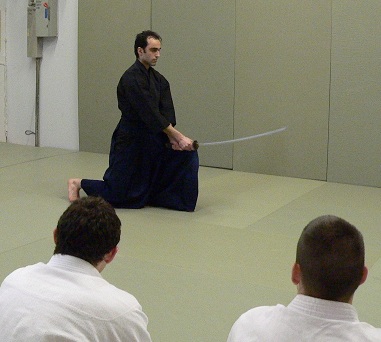 There are many different stylistic approaches to the use of weapons in the martial arts. There is a common theme though. As a general rule, weapons are simply considered an extension of your body. The stances, blocks and strikes you use when unarmed are used in the same contexts when using a weapon. The only difference is that you use the weapon as an extension of your body to enhance your defensive or offensive capabilities.

In Can-ryu Jiu-jitsu, we emphasize the use of weapons of opportunity. Weapons of opportunity are simply items that are commonly found in your environment that could be used in self-defense, but aren’t necessarily carried for that purpose. This includes things like a flashlight, hair brush, rolled up magazine, umbrella, stick, cane, etc. Whatever the weapon, we still use the same stance and style of movement as we do in our unarmed defenses, we just introduce ways to enhance one’s impact, reach, and overall effectiveness, using the unique qualities of the weapon used.

Other martial arts styles do this too. We recently had a guest instructor, Farshad Ardestani Sensei from Aikido Yoshinkai Burnaby, come to our dojo to run a 3-hour Iaido course. One of the things he said directly relates to this concept. He explained that it is not the sword that makes the attack, it is the one who is wielding it. This was made evident when it came time to swing a live blade to cut through pool noodles later in the course. Even with a fully sharpened blade being swung through something as soft as a pool noodle, if the person doesn’t swing with good form and intent, it is quite possible not to cut all the way through the noodle. When I was given an unsharpened sword, I certainly had difficulty making a cut all the way though the noodle, and yet the instructor with his years of experience developing his form, could do this easily. There is also a lot of psychological and philosophical elements in which weapons are not only an extension of the body, but also the mind. My blogger friend, Stu Cooke Sensei, covered this angle of weapon work in his blog post, ‘Iaido: Living Under the Sword‘ that he wrote after attending this same course.

All the different martial arts I’ve trained in use weapons as an extension of the body and mind, from Karate with the use of the Bo, Tonfa, etc, to Filipino martial arts and their use of knives, sticks, etc. I find it somehow comforting that we all are unified by these principles. Do you train in weapons? How does it relate to your unarmed techniques? Please share in the comments. 🙂