After a fantastic bull whip demo at last year’s PAWMA camp, my two students who accompanied me to the event and I were intrigued. Sifu Restita DeJesus (from the Seattle Wushu Centre) took us outside for our own informal bull whip lesson in the parking lot, using whips she had made herself. Some were beautifully made, intricately wrapped with para-cord, but the ones I liked best were the ones she had made using simple items from her local hardware and sports stores. After that, the three of us vowed to make our own whips one day. Last weekend, that day finally came. Using the YouTube video that Sifu Restita shared, we set about this task. While the video was easy to follow (see below), I have a few of my own tips to add from our experience of it. 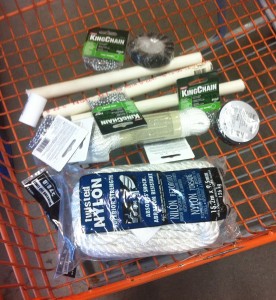 1. If easily embarrassed, avoid chit-chat at Home Depot. I had a little trouble finding the various things I needed, so I got some help from one of the staff. One item at a time, I gradually found everything I needed. The customer service guy looked in my cart, baffled and asked, “What is this all for?”  I’m not shy, so I responded, “Oh, me and my friends are making our own bull whips.” He arched an eyebrow, and quickly moved on to show me were the PVC couplings were. 2. Buy supplies for multiple whips. Whether you want to make several whips with different lengths or whips for you and multiple friends, it makes more sense to obtain materials for several whips. The PVC pipe only comes in 10-foot lengths, for example, and most of the ropes came in much longer lengths than was needed for a single whip. It cost us about $32 each to make three 6-foot bull whips. 3. Use hockey tape. It’s cheaper than athletic tape, comes in more colours, and works just as well. 4. Read all the foot notes in the video. I missed a couple related to length adjustments that would have been helpful. Plus, some of the humour in the footnotes is cute. 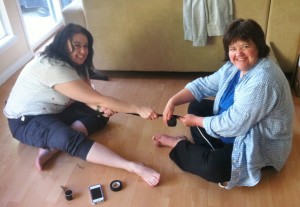 5. Make sure your friend holds firmly. When wrapping the whip with hockey tape, make sure your friend hold the pieces that make the inside of the whip straight, keeping them firmly in place. This keeps the whip from getting “twisty.” 6. Leave plenty of time. In the video, he says you can make your own bull whip in 15 minutes, but it took us closer to 3 hours to make all three of ours. Perhaps it would take less time when you’re experienced, but it’ll probably take a lot longer for you on your first go at it. 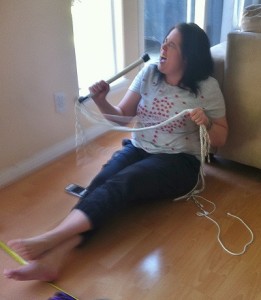 7. Have fun with it. We’re not the most “crafty” people in the world, but we’re always willing to give it a go when it comes to “mixed martial arts & crafts.” That being said, because it’s a long process, it’s a good idea to have snacks and songs to help keep you going. As you can see, Melissa found creative ways to rock out while we made our own whips. 🙂 8. Be safe!!! Once you finish making your whip, you’ll verily want to go out and try it. As you can see below, I have been enjoying playing with my own. I would also highly recommend getting some instruction first. Even when you sort of know how to do it, you can still catch yourself inadvertently. I would suggest starting out wearing safety glasses and long pants. I’ve only had a few very brief lessons myself, so I still get a few incidental, unintentional light whips from back lashes. Better to be safe than sore! Thinking about giving it a try? Let me know how it goes in the comments. 🙂

4 thoughts on “Whip-Making Tips: For a Crackin’ Good Time!”