Every so often a someone asks me that if I was only going to learn one strike for self-defense, what would it be? I don’t really have an answer for this, because I don’t believe that there is a magical strike that will be all things to all people in all scenarios, even if they practice it 10,000 times. I think Bruce Lee would probably agree with me, despite the evidence to the contrary above. When you take the concept to the extreme, the point becomes that much more plain, like in Episode 2, Season 1 of Enter the Dojo (below).

That being said, there is benefit to focusing on fewer strikes that are useful in a wide range of circumstances, rather than over-diversifying to the point that you’re not really good at any of them. This is especially true if you’re only taking a short-term self-defense class. There are 5 strikes I think cover a fairly wide range of circumstances, all of which we teach in our women’s self-defense classes, as well as part of our Jiu-jitsu curriculum. They follow the tenets of Can-ryu Jiu-jitsu in that they are simple (the fundamentals of each strike can be learned in 3 minutes or less), they utilize gross motor skills (why they are easy to learn), and they can be applied in a variety of situations (allowing for commonality of technique).

1. Palm Strike to the Nose. A hard strike to the nose is very painful for most people, even if it doesn’t break, due to the cross-section of nerves that lie around the cartilage. It causes the tear ducts to empty, making it hard to see. Even if your attacker is not feeling pain in the nose, whether it’s because he’s drunk, high or experiencing an adrenaline dump, there’s still a good chance they will be distracted by an attack to the nose. They are likely to still experience a flinch reflex that is ingrained in most people, and the eyes will still tear up from a solid strike, obscuring their vision.

2. Shin Kick. The shins make for great distraction strikes. A strike to this area can be quite painful and can even cause a person to lose their balance and/or footing depending on your timing. It’s faster and easy to land because it comes in below a person’s peripheral vision, making it hard to see coming. It’s also really great as a low-level force solution because it’s not likely to cause permanent injury.  If the situation warrants a higher level of force, a slightly different version of this kick can be used in which you lift the knee up and stomp through the knee rather swinging through the shin. 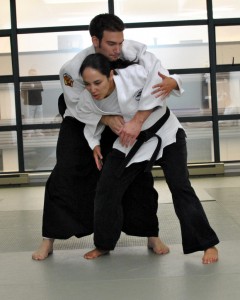 3. Finger Whip to Groin. The groin is a good target on the ground because it doesn’t take much force to cause a reaction. Even just the threat of a strike to the groin can be enough to make an attacker shift his hips away to defend. Most attackers will experience great pain when their groin is struck. The finger whip in particular is useful as a strike when your arms are pinned, say underneath a bear hug attack from the rear. It is an easy movement to shift your hips to expose the groin then whip your finger tips up into the testicles to get the desired reaction.

4. “Gerber” Slap. This is a fancy name for a big, ol’ power slap to the head (sometimes called the ‘Gerber slap’ named after a cop who used it frequently). An open hand strike is an effective way of getting the desired concussive effect on the brain that stuns the target, possibly even knocking them out. It is better than a punch in the sense that you don’t have to worry exactly where you hit the head for fear of breaking knuckles (the skull is 40x denser than concrete – not ideal for punching).

5. Knee Kick. The knee kick is quite versatile when confined in close quarters. It is powerful, using all the strongest muscles of the leg, and can be used on a variety of targets, including the groin, motor points in the legs (i.e. lateral femoral, anterior femoral), solar plexus (when the target is bent over), etc. Below is a self-defense technique I teach against a side headlock using the knee kick.

*Bonus: 6. Elbow Strike. Though I didn’t include this in my top 5 (mostly because it’s not as quick and easy to learn to use effectively as my other choices), it is still one of my favourites to use personally. Like the knee kick, it is versatile in close quarters and powerful, allowing the user to coordinate all their body mechanics into one bony strike. It can be used in a variety of angles, making it practical for use on a wide variety of targets such as the head, ribs, nose, groin (in some cases), as well as a variety of motor points (i.e. brachial plexus origin, solar plexus, lateral femoral, etc.) Definitely one of my go-to strikes.

In my next blog post, I’ll be discussing my top 5 favourite vital target attacks for ground defense featuring material from my newly published book, When the Fight Goes to the Ground: Jiu-jitsu Strategies & Tactics for Self-Defense.

What are your favourite striking techniques for stand-up self-defense? Please share in the comments. 🙂