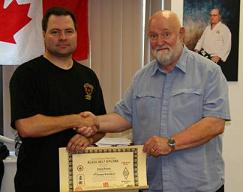 Interested in martial arts training for police work like the RCMP or other forms of law enforcment?  You should know that not all styles of martial arts are well-suited for practical application in a police / law enforcement context.

Can-ryu Jiu-jitsu has a long history of development with specific emphasis on usage in police work.  Professor Georges Sylvain, founder of Can-ryu (seen on the right of the photo here) served as a military police officer during the Korean War and as a municipal police officer for 15 years in Ottawa.  He was also Chief Instructor of physical defense training at Algonquin College in Ottawa for its Law and Security program, having taught there for 25 years, in addition to having been Chief Instructor to RCMP self-defense instructors in Rockliffe, ON before they were relocated to Western Canada.  In addition to his instructive capacities, Professor Sylvain has also served as an expert witness in self-defense and has testified on the behalf of a number of police officers.

Steve Hiscoe Shihan (seen on the left of the photo here), 8th degree black belt and heir apparent to the style of Can-ryu, is a 20-year veteran RCMP police officer with the rank of Corporal.  He is currently assigned to the RCMP Training Academy in Chilliwack and is responsible for training and coordinating the assignments of the academy's instructors.

With all the police influences, Can-ryu Jiu-jitsu teaches the base of fundamentals that are taught for unarmed defense for police and other forms of law enforcoment work.  These include:

If you're a member of the RCMP, VPD or other municipal police service, GVTAPS, etc. or you're a corrections officer, deputy sherriff, customs officer, etc, you'll develop skills in our classes that you'll find useful in the field.

To experience the effectiveness of Can-ryu Jiu-jitsu for yourself, contact us to set up an appointment to do 2 free trial classes.